It only took me a whole month to set up my 146B zigzag sewing machine. 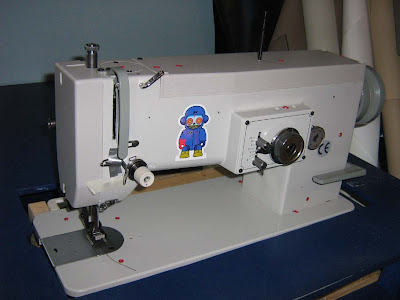 Half that time was spent trying to get a two-inch pulley for my hot new DC servo motor--Reliable's Sewquiet 4000. I was a dumbass and didn't read the online instructions beforehand and didn't realize I needed the 50mm pulley instead of the 90mm (it doesn't come with). According to the instructions, only two machines absolutely require the 50: blindstitch machines and walkingfoot zigzag machines, which is what the 146B is. Though I imagine most upholstery machines will benefit from the smaller pulley in the power and control departments.
After I realized this, I ordered one off eBay...but got the wrong type. Though, I didn't realize this till a week after I got it (I was working on something else). The dickheads who sold it to me used a picture from the Reliable Web site. Grr... (The Sewquiet's shaft is a bit smaller than other motors, I think. So if you want a 2" pulley for a 3/4" shaft, let me know.) And the only place that sells the pulley online (that I could find) is the Reliable Web site (www.reliablecorporation.com), and they're in Canada. So shipping for a seven dollar pulley is sixteen bucks. Yikes. So it goes. 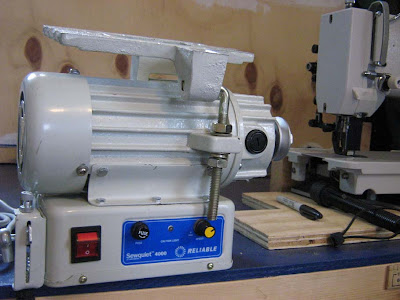 Sewquiet. And it is. I haven't sewn a whole lot on it yet, but I think it's quieter than my million dollar Sailrite motor. Sweet. Though it weighs an effing ton. Installing one of these by yourself and without turning your table over isn't a whole lot of fun. Ha. 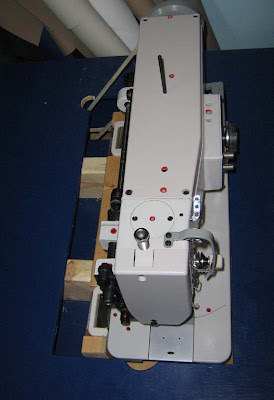 Sticking an industrial sewing machine on a regular table is pretty dumb. But I'm giving it a try. I built this table for my Sailrite Ultrafeed, which is not an industrial machine. Standard sewing tables are too small for bagmaking...though anything bigger wouldn't fit through your front door or in a UPS truck. I think buying a new sewing table and sawing my old table in half to abut that table probably would've been eight times faster than what I did...but whatever.
Posted by cory at 5:20 PM