After coming up with a pattern that I was happy with...or at least would do...I've started sewing the pack.
And I'm almost done with the back panel. The stitching's a little slapdash, but it's strong. 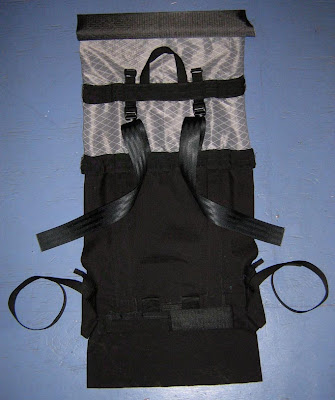 X-Pac & 1000d Cordura nylon. I'm shooting for a pack size of 14x7x33...so they'll let me on the plane. (This'll still have to be checked, of course.)
There's a pocket on the outside for the cross piece of the frame. It closes with Velcro. I had a picture of the pocket open, with the aluminum poking out, but I don't know where it went. Ha.
This piece distributes the weight from the vertical stays to the two loops that'll connect the pack with the waist belt. 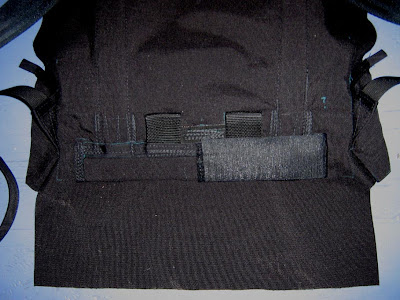 There're the two heavy duty loops at the bottom that'll mesh with the waist belt.
And below that is part of the bottom of the pack. I was going to make a round bottom piece, but decided that it would take too much time to design and sew, so we're getting a rectangle for a bottom instead. Making it even simpler...the way I like it. 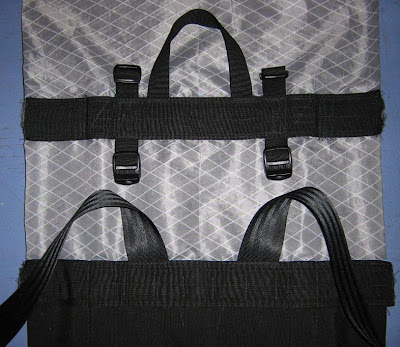 Tri-glides for closure straps, ladderlocks for load-lifter straps, and unfinished shoulder straps...for shoulders.
After I attach the belt I'll figure out how long to make the shoulder straps, and add the pads 'n' things. I'll be using the same design I used on the last backpack I made: here. 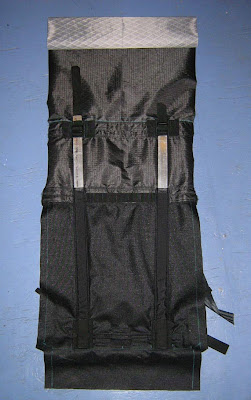 Here's the inside of the back, with stays in place. 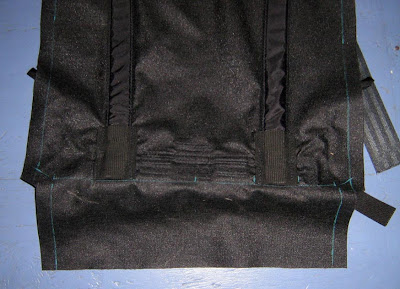 Here're the little booties they slip into. 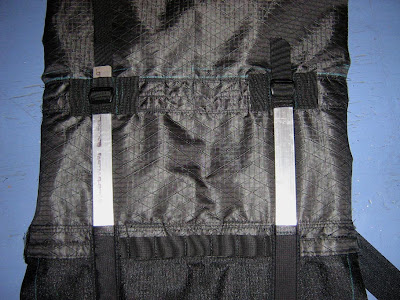 And the closure system at the tops of the stays. And there's a piece of webbing there for a water bladder pouch. 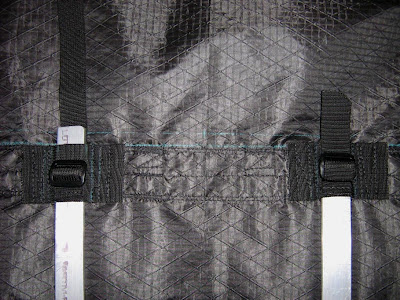 Okay, what's next:
>I'm going to make the hip belt. This might take a bit, 'cause there's lots of measuring involved. That's what takes the most time with these projects: all the rulerwork. But at least I have the shape worked out already. I just took my old waist belt and slimmed it down a bit. That thing took so long to design...whew.
>After I get the belt made, and make sure my pack-belt connection idea works out, then I'll sew the lumbar pad onto the pack.
>Then it's just attaching all the compression straps and finishing the shoulder straps, and other bits & pieces. And then it's done. Piece of cake, right? Ha.