Okay...the last sewing machine I'll be buying for a while...unless I see a sweet deal on an old industrial that I can use for a dedicated binding machine...but that's a ways away, methinks...unless I decide I don't want the 146B anymore...and an industrial serger would be nice, too...
Anyway, behold! the Singer 20u73: 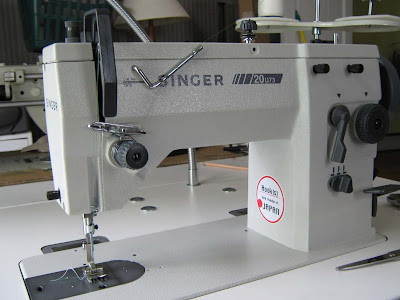 Bring on the mother-effin' applique! Ha...
The 20u class has been around for quite a while and I've been looking for one of those nice blue ones from Japan on eBay with almost no luck. I was close to winning one last month, but I wasn't paying attention at the end...so it goes. The seller said nothing of the condition of the machine, so maybe it was for the best. Though, what I really want is one of those clear-coated laminated sewing tables. So nice!
I never thought I'd actually ever buy a new Singer machine, but I did. There are so many copies of this machine, it's crazy. I think Industrial Sewing Machine Man has at least eight machines on his website. Consew, Tacsew, Reliable and Artisan all have copies. Artisan has one with an oil pump, which looked cool. And the Reliable seems like a real good deal...if you order it from their website. You get a plywood table, their servo motor, and a pretty swift light. I'm not sure if it's the same deal if you order it from Sewing Man...though maybe.
But I decided to go with the original...it was just a little bit more.
I have three other machines that do zigzag...my 146B, Ultrafeed, and Kenmore. The Kenmore's not industrial, so throw that out. And the other two are too clunky to do applique for any length of time without going crazy. Plus they're way too heavy for lighter stuff, like 200d nylon. 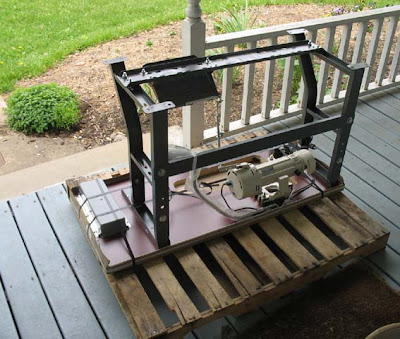 My back is pretty pissed that I helped the FedEx man carry this onto the porch. I was too excited to think of taking the head off the pallet first. (This photo was obviously taken after I cut the plastic off and removed the head.)
I usually prefer to set up my own table, but it was the same price to have it shipped assembled (somewhat). It probably would've taken just a little bit longer to put it all together outta the box, though. I still had to adjust the height and move the pedal over and drill holes for the knee-lift mount and thread stand. And the rest-peg hole isn't drilled either. But I guess it's nice that they put the motor on there for me. And the drawer. 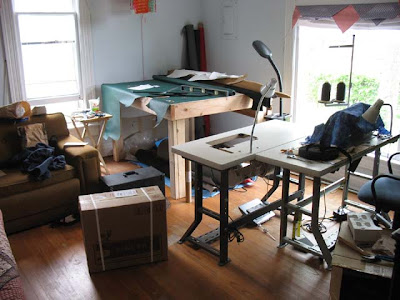 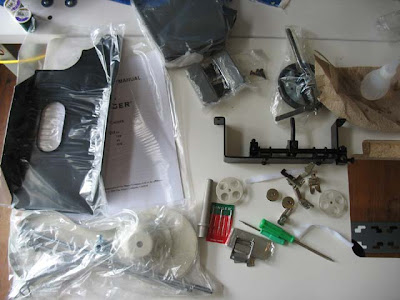 Oh sweet, I get some fancy feet. And just two extra bobbins? What the hell. I guess a lot of people probably use prewound bobbins...
Oh nuts, is that the knee-lift mount there? I already turned the table over... 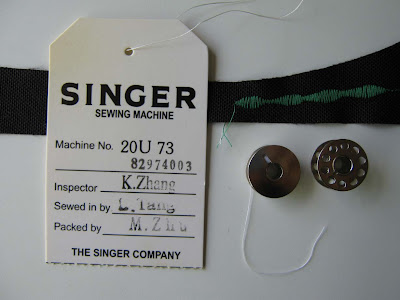 Thanks, K, L, M!
The bobbin (left) for this machine is strangely slim...though not as slim as, say, a Singer 221's. I was hoping my cache of extra bobbins for my Kenmore and Ultrafeed would fit, but they don't. Boo.
Some test stitches, by me--not Tang. I'm excited about on-the-fly width adjustment. Yeah. 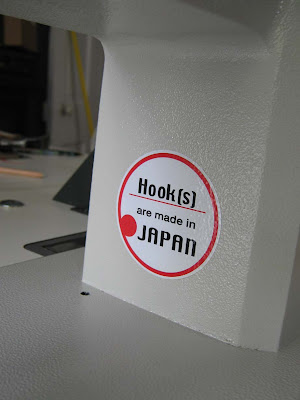 Oh, the hook's made in Japan!...as with most every other Asian-made machine. This machine (and all 20u copies, I believe) was made in China. You can see that real small on the back. Ha. The quality of casting and machining looks pretty good on this machine, though. I'm not thrilled with all the plastic levers, though. C'mon. I have to say, though, the action on the stitch length- and thread tension knobs are the best of any of my machines. So nice. 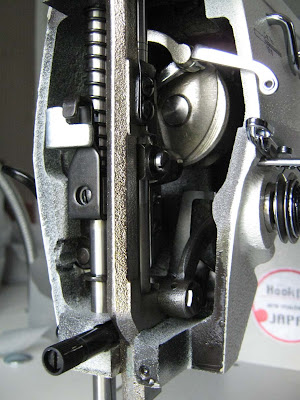 This machine is soo simple compared to my upholstery machines. I like that. 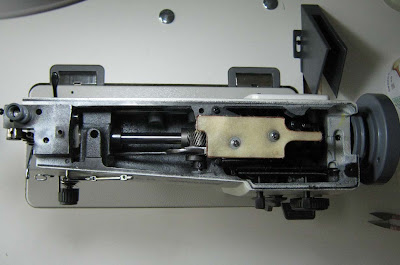 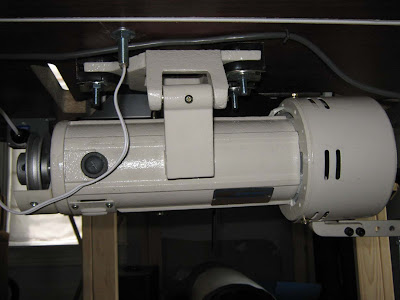 I think this is a Family brand servo motor...something like that. I think it must be a Tacony house brand. It seems okay so far. It's the most growly of all my servo motors, though. And it has a brake...but it doesn't work as well as the SewStrong's, so it's okay. Ha. (I don't like brakes on my motors--I live dangerously.)
You'll notice I don't have the belt on here. It's outside airing out. It's made of that same gross black tar as the SewStrong's. Boo. I can't stand that smell. 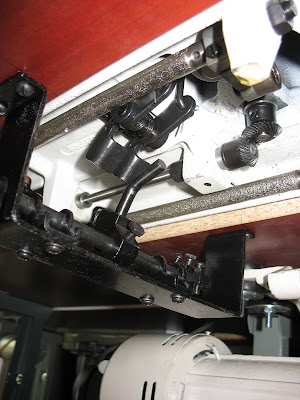 You can either have the knee-lift lift the foot or change the stitch width (bight). I have it set up to lift the foot. I don't plan on doing any intricate embroidery at the moment. 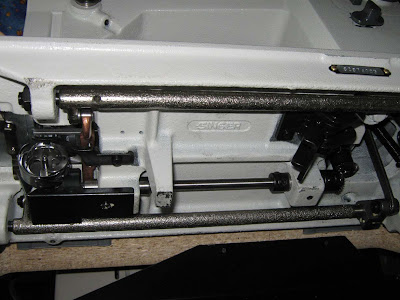 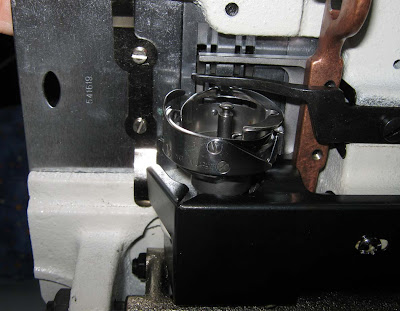 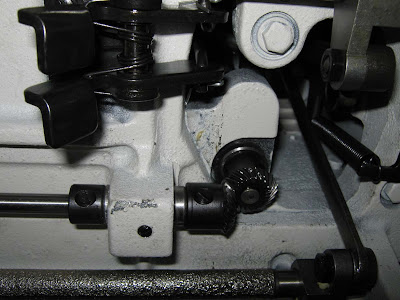 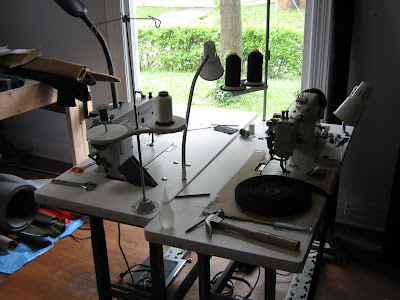 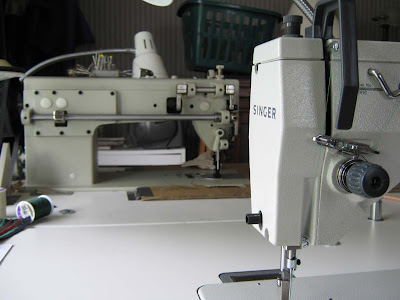 A Singer copy and the real thing.
Posted by cory at 3:59 PM

Hi Cory,
I have always had a passion for fashion but no sewing skills at all. I often look at clothes in the stores and thought i could have made that better or have done something differently to make it better. I am too aged to start a degree at FIT and too caught up at work. I recently decided to purchase a machine and learn to sew on my own. At the store, i was intrigued by the Singer 20U73. I have never used a machine before. I just knew it is an industrial machine and could do a lot and i knew someday i just might want to manufacture my designs.
I have been searching for someone to help me understand this machine when i came across your blog. I am happy that you like it because i was getting to the conclusion that i should have purchased a simpler machine. I will continue my search and hopefully you will continue to blog your updates on our machine.

Hi Danita,
Compared to new "domestic" machines, the 20U is pretty simple. It is also very popular. Here's a tutorial I came across last week: https://www.youtube.com/watch?v=JWxIhiSQnno
I hope you enjoy your new machine. Happy sewing!