While I'm waiting for my sewing machine pedal to cool down, let me tell you about something weird that just happened when I was sewing.
So there I was just stitchin' along, minding my own business, when my machine stopped feeding. (This is my li'l 70s Kenmore machine.) I was like, Holy shit, what's going on! So I looked at it closer and saw that the presser foot wasn't going down with the feed dogs. [There should be constant pressure on the fabric from the foot, otherwise it won't advance when you sew.] So I took the cover off and looked around but I couldn't really see anything--everything's so smashed together in there, it's hard to see. But I knew something was probably catching 'cause the presser foot lever didn't have any tension on it and it was kinda wobbly. So finally, after looking in there with a flashlight, I saw that part of the presser foot shaft was catching on a loose screw. The screw for the foot lever had worked itself loose after lifting the foot a million times. So I tightened it...after having to remove the light housing. And that was that.
Sewing machines can be finicky creatures sometimes. 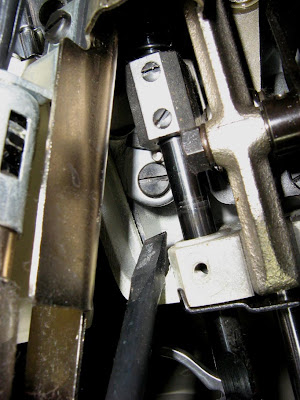 There's the loose screw there, right above my screwdriver blade. What was catching was that box right above it, with the two screws. 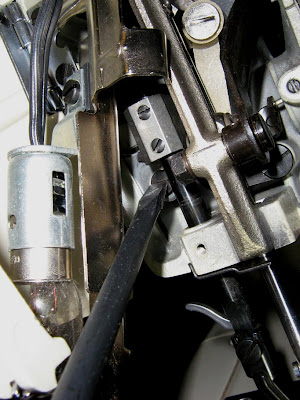 Something similar has happened with my needle-feed 111 machine. Though that was my own doing. I raised the outside presser feet (the ones that just go up and down) a li'l bit so I would have more clearance when stitching from a lot of layers to a few, and all was good till I sewed over something really thick. Then the machine locked up. And I'll tell you, when an industrial machine just locks up, it's fucking scary.
So I figured out that my raising the feet just a little bit, like an eight of an inch or less, caused the rotating bit on the thread take-up arm to knock against a piece on the presser foot shaft...but only when sewing over really thick material.
A pretty lame design in my opinion, but there's so few space in that part of the machine and so many moving parts in a needle-feed walking-foot machine, I suppose it's hard to avoid. 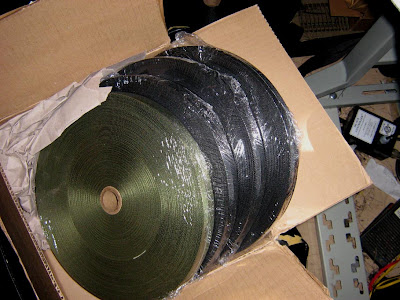 I'm trying out a new source. But since it's a mil-spec it should be pretty much the same as the webbing I'm using now, me thinks.
I ordered this from Bally Ribbon Mills, in Bally, Pennsylvania...not too far away from Reading, PA.
Peep at their site here: BallyRibon.com Check out their section on 3D weaving. Awesome.

If you're looking for this webbing by the yard, you can get it from ParaGear.
Okay, back to sewing...