Here's a 24incher Fatty I just made for my friend Chris. I'm calling it a Fatty 'cause it has a larger bottom than it normally would. I haven't made a whole lot of 24-inch bags...I think every one has been different...but a standard sized 24incher would have a 17x7 bottom, or 15x9. This has a 18x9 bottom. So with a standard or traditional messenger bag, it would usually have a 27-inch flap....blah, blah. It's big. Also: fourteen inches high, with a fourteen-inch flap. 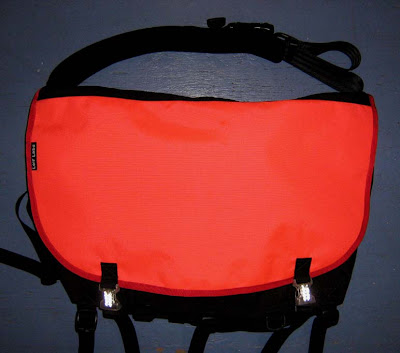 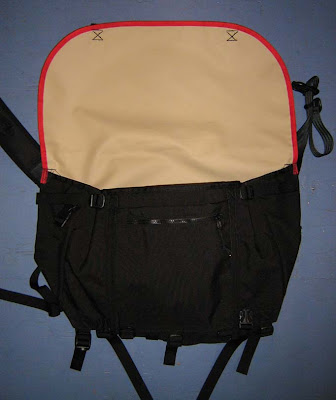 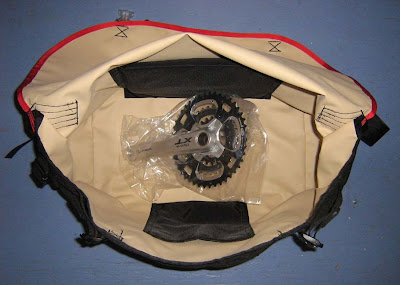 Padded back & floating liner, of course. 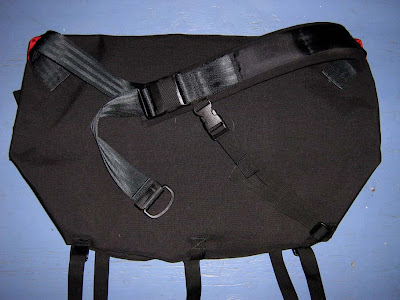 Got me some fancy reflecto buckles from ITW Nexus. These are the only two I've got. If I want reflectors on the buckles I have some 3M trucker tape I slap on there. That way you can replace it when it gets all scratched up. But these are fun. 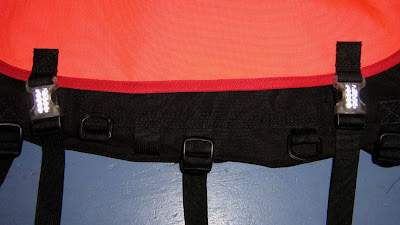 See that loop down there on the bottom? Last time I was in Chicago I saw this old army pack (a great inspiration for me) with loops on it like this. Hot damn, I thought. And here they are.
These'll come in handy if you want to carry a big box under the flap. There's one on the other side...so run a line across the box from loop to loop, and then close the flap over the box. If it's a real big box you might need extension straps.
Chrome has little loops like this under the flap on some of their bags specifically for box-carryin'. I think it makes more sense to have them on the bag. That way you can use 'em for other things. But that's just me. 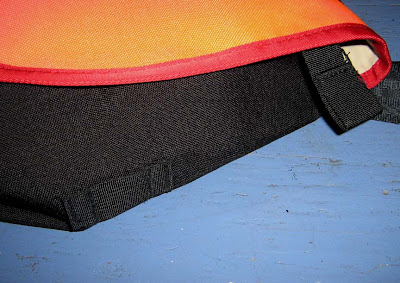 I think I put them too far to the edge though. Next time I'll move 'em up a bit. 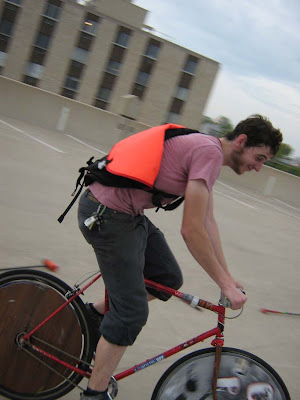 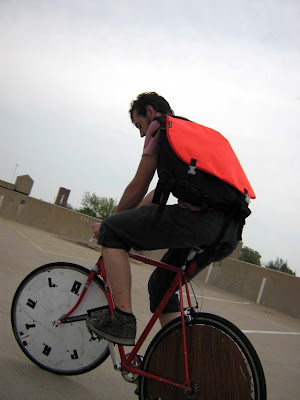 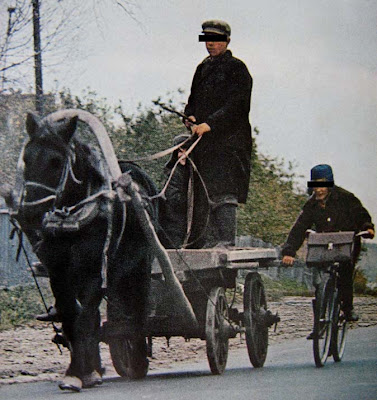 Here's a backpack I made for Lance at SquareBuilt Bicycles in New York. (Check 'em out--great custom hand-built cycles.)
You can strap a bike frame to it and carry a shitload of whatever you want.
This is probably the biggest backpack I've ever made...or at least the heaviest...I think my backpacking bag was probably a bit bigger...
This bag tested the very limits of my sewing machine. Yikes.
The main compartment measures 18x16x11. 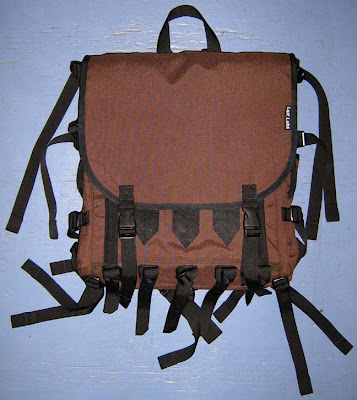 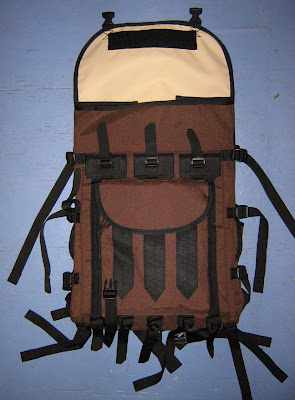 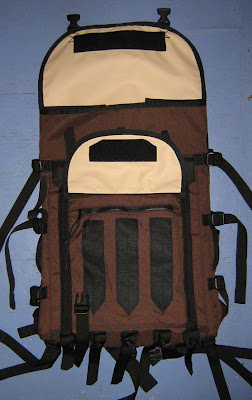 This is a new strap design from me. I'm really happy with how it turned out. Pads are 2.5 inches wide and half-an-inch thick. 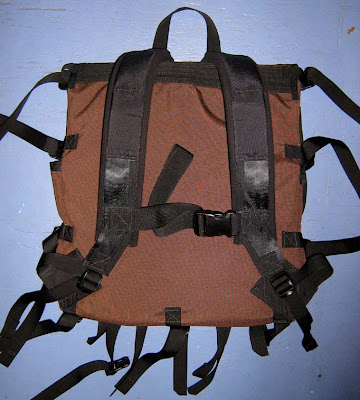 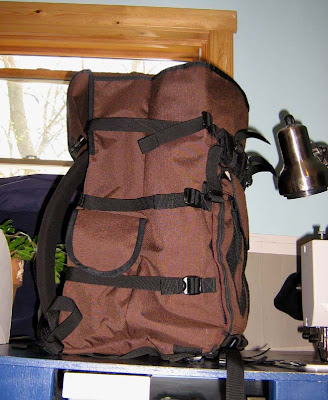 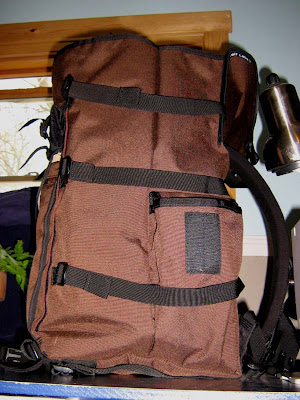 Oh, where am I going to put this fork? 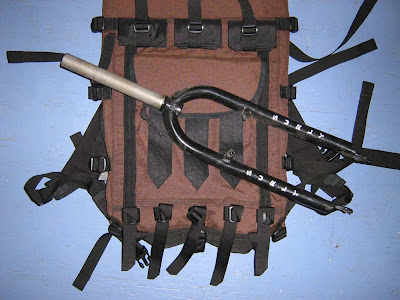 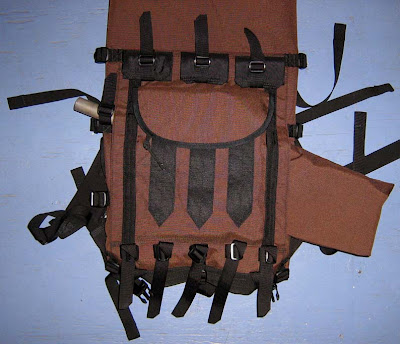 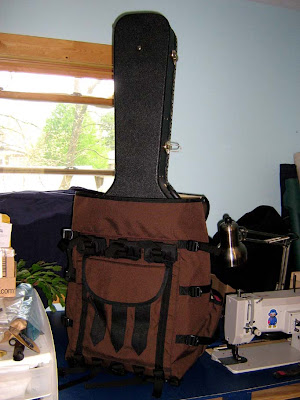 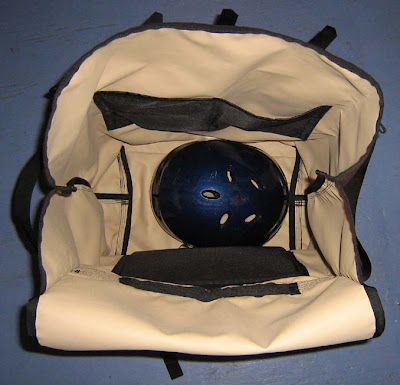 I had an epiphany today and came up with a better way to make my phone pouches. This gives them a real clean flap. I don't know why I didn't think of this before--I use the same technique with my wallets. Oh well, now I know. 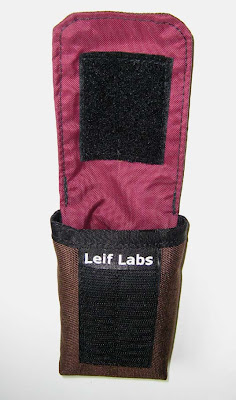 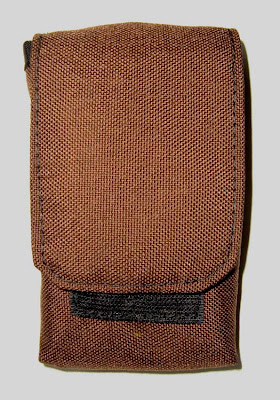 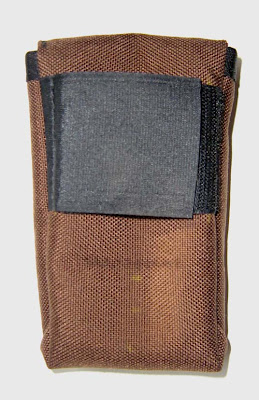 This is the reason Velcro was invented, as far as I'm concerned. You can put this pouch anywhere now. 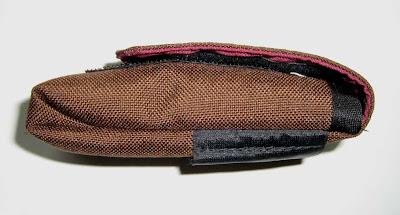 Sewing a bottom on anything less than two inches thick is a real pain in the ass. That's why I like this pattern...you only need to sew on the edges. Sweet. Here's what the pattern looks like for the bottom (this is a one-piece pouch, but I didn't think of how to do it till after I cut this out): 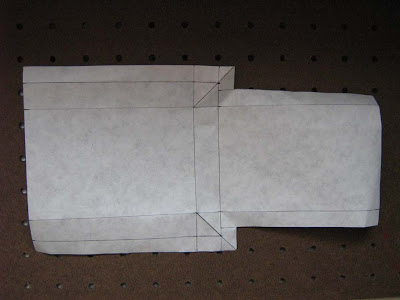 I came up with this genius pattern about two years ago when I was a desk attendant at a mental institution. Oh yeah!
Posted by cory at 6:56 PM No comments:

ITW Nexus came out with some new buckles a while ago and I finally got around to ordering some samples. My favorite of the bunch are the one-inch buckles in the Jet series. They're on the right. On the left are the buckles I currently use on all my bags...a member of the Trovato family, also from ITW. 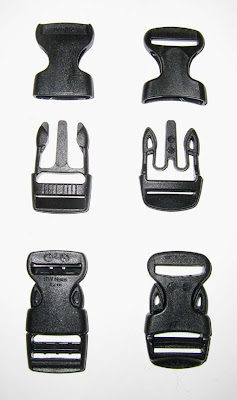 The Jet buckles are a little easier to release than the others and they feed a little better, too, due to their curved mouths. I still think the Trovatos look better, though. The Jets are a little too fancy for me. Ha. But we'll see, I might order 'em anyway...they feel so nice.

To get your mitts on some, vist ITW's website at www.itwnexus.com.

Happy trails.
Posted by cory at 6:38 PM No comments:

I've been working on my Web site a bit lately. And while my page-designing skills are still in the Caveman realm, I think the site's close to doing what it's suppose to do. Take a peek: 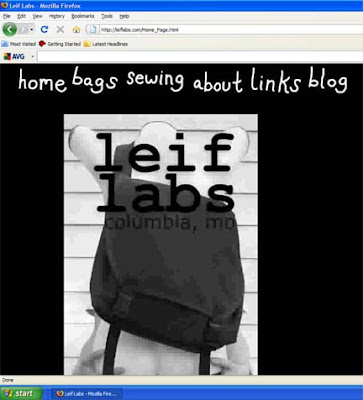 I've also been putting photos up on my newly minted Flickr page. I imagine that'll be a nicer home for them, rather than just having them scattered about on this blog.
Posted by cory at 9:32 PM No comments: