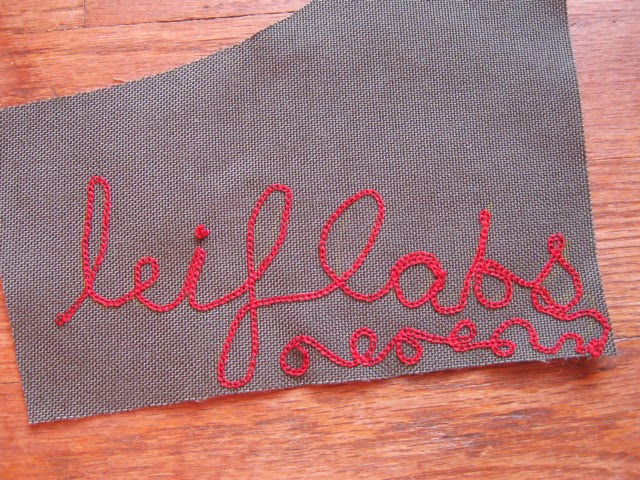 Finally getting my Consew 104 up and running, with pretty good results. 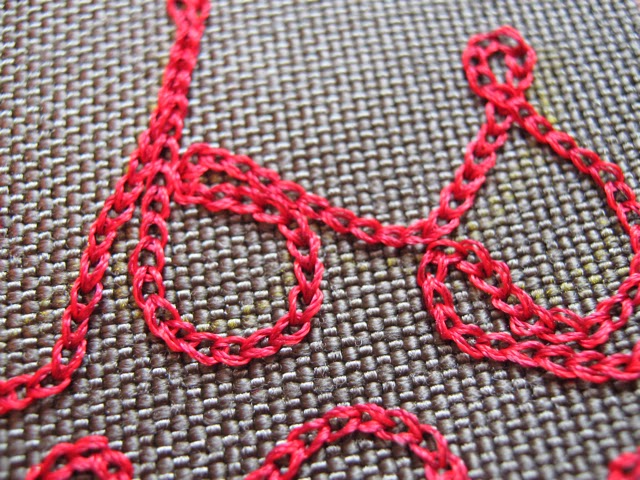 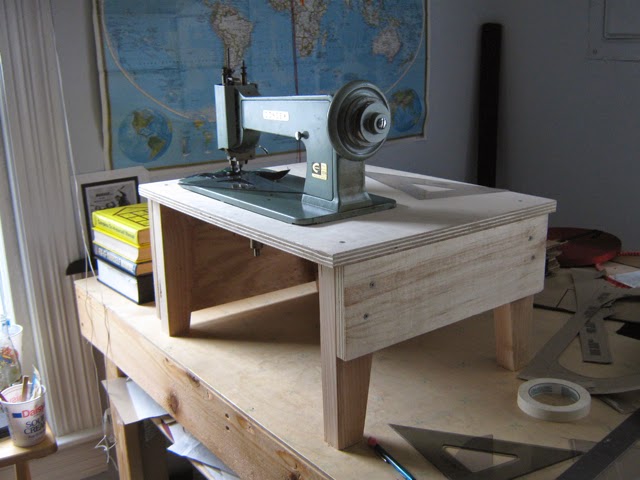 Time to start practicing...
Posted by cory at 9:21 PM No comments:

I guess I have weird feet or something 'cause it has been a challenge finding the perfect pair of wet-weather sandals. I've even started playing around with making my own...

When I was a kid in the 90s I had a pair of Tevas. They were alright, but guess what: Velcro sucks when it gets wet. Despite the advent of those little rubber bands on the straps, I gave up on Teva.

After college I got my first pair of Chacos: 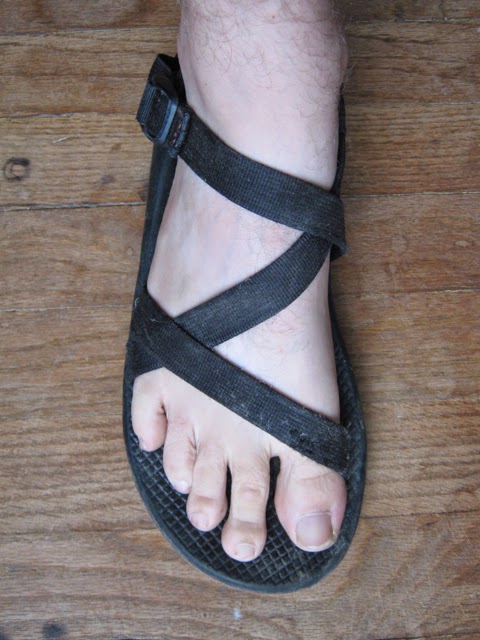 They were pretty rad for a while, but I got the toe-loop model and it kept strangling my toe something awful. (The toe loop is pulled down, that's why you don't see it.)
And then the strap started irritating a nerve on the side of my foot by my pinkie toe. Boo. 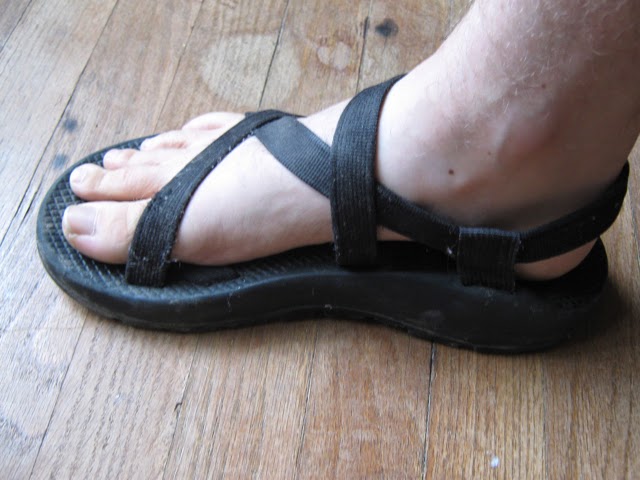 My second pair of Chacos: 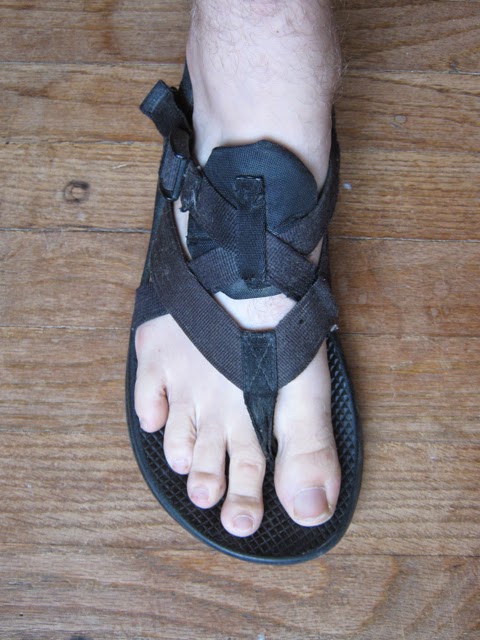 The something-thong. I got these for a camping trip in Hawaii. No strap by my pinkie toe, great support: good. Loose, unadjustable straps, weird pressure point at the top cross, and no heel strap: bad.
Though, after some mods, it turned into a great sandal and gave me a few years of great times outdoor. 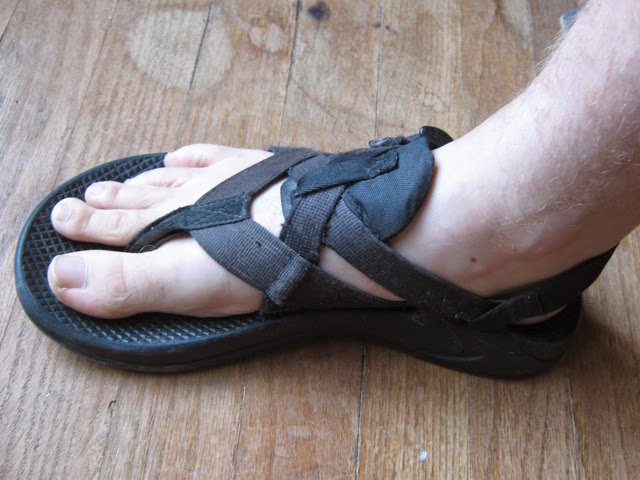 But, all good things must die. 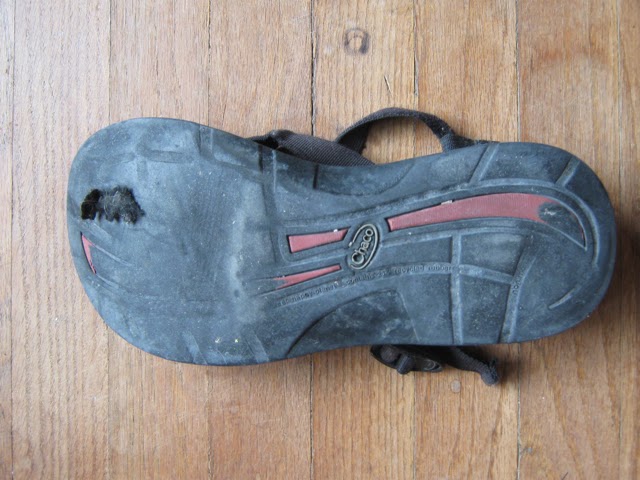 The sole started to delaminate (see it bubble there?) and the thong came unglued and pulled through the foot bed last year. Bummer. I threaded it through the bottom and knotted it to get to the end of summer. 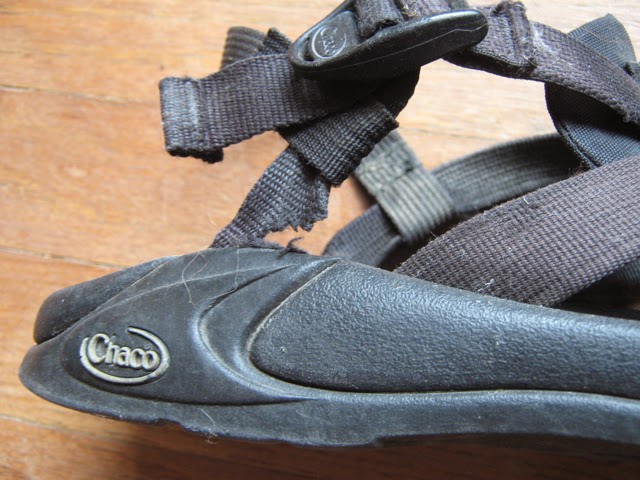 Though, on closer inspection, my heel mod was tearing out the cross straps, so the sandal was nearly dead already. And since this is an imported Chaco, you can't replace the straps or resole it. And, I don't believe they make this exact model anymore. There's something similar, but the new model has elastic straps, and the thought of having to alter a new sandal again seems silly.

From Barefoot Ted and Co up in Seattle: a cool-looking, minimalist sandal. Now, I don't give a flip about barefoot running or "ground feel" but these were appealing to me: simple, lightweight with Vibram soles. 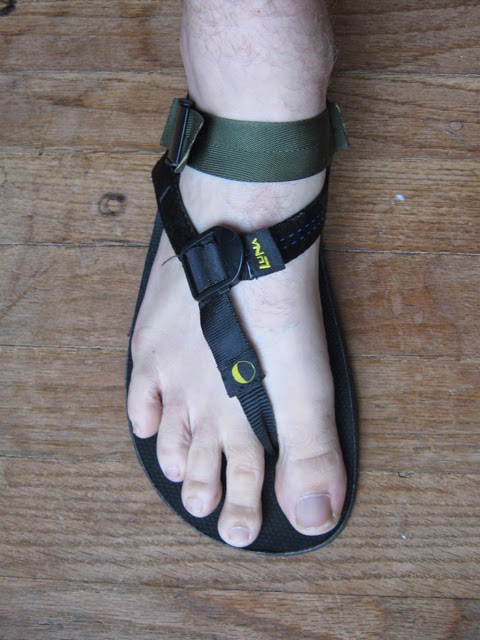 Right away I added what Luna calls a "tech strap" to the elastic heel strap. My heels don't seem to protrude much so the strap was sliding off all the time. And since the heel strap tensions the front strap, this would cause the whole sandal to go limp.

I also have inward sloping ankles and I was having problems with my heels coming off the footbed and hitting the ground. This doesn't happen as much since the sandals have broken in and the heel area has cupped a bit.

How they do in water: For swimming around they are fine -- better than Chacos since they're so light. Walking in and against current is a bit unnerving since there are only three contact points and it feels like the thong might just pull though the sandal. It won't, but the water puts a lot of pressure on it. Also, I wouldn't get in moving water without the tech strap. They slide around more than Chacos, of course, so I recently gouged the bottom of my foot on a rock. Boo. 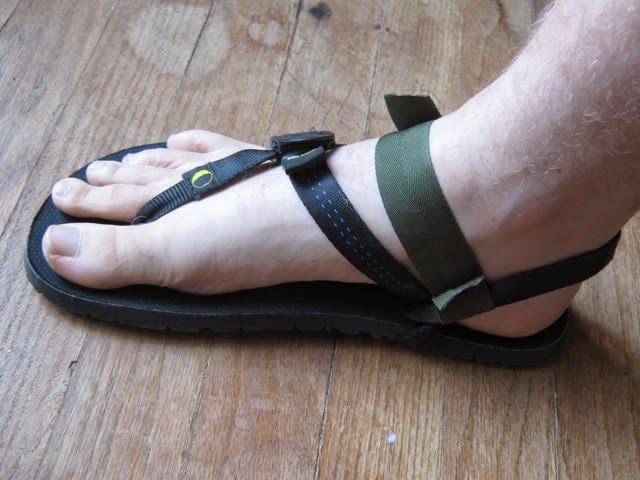 I should've got a size larger, too. When walking in shrubby vegetation I get poked in the heel. 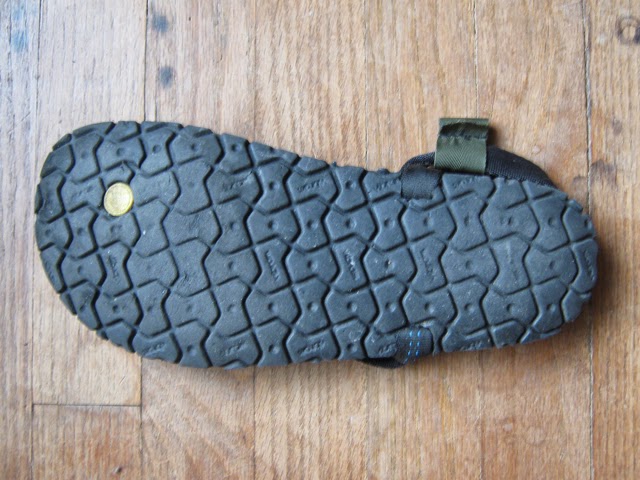 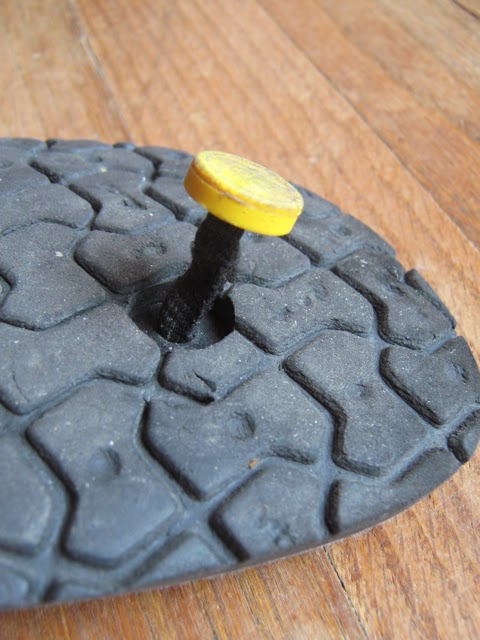 Lunas have these cool plugs to keep the thong from pulling through the sole. 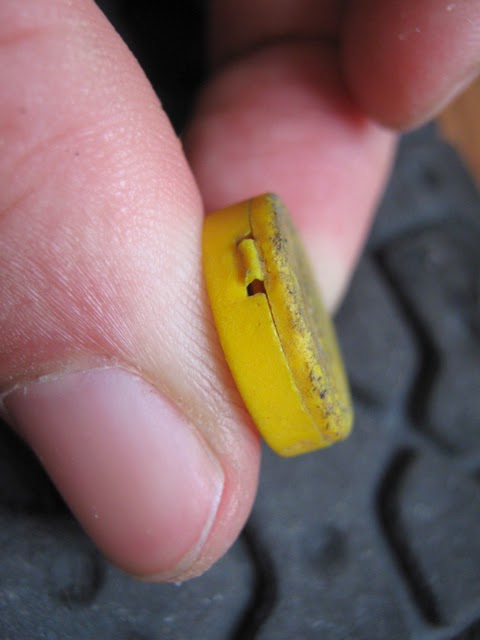 Looks like they're hinged. Kinda want to pop one apart and see how the webbing fits in there, but I shouldn't. Other minimalist sandals use a knot or injection-molded plugs.

So, Lunas: pretty nice for running around on flat, dry surfaces with normal-shaped feet. Just okay for water sports. (Though, they're not really marketed as such, so I can't really complain too much.)

What I've come up with:

I like the DIY construction of the Lunas. The idea that you could take any appropriate sole material and poke some holes in it and make a pair of sandals is appealing to me. Though, I wanted them to be a little more secure. The idea that the tech strap on Lunas is an add-on -- almost an afterthought -- is annoying since they make the sandals so much better (for me). 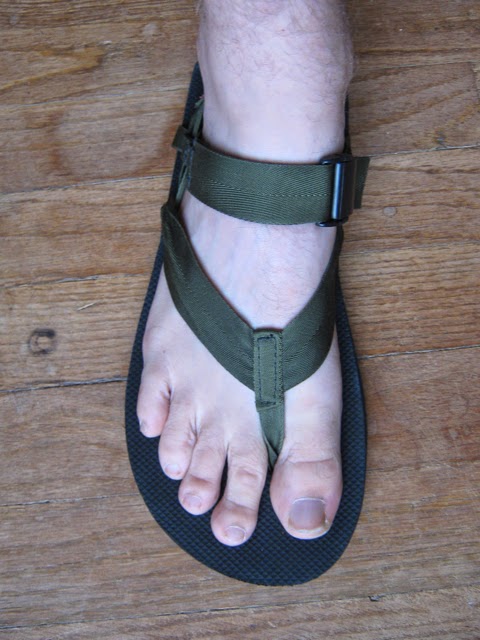 I got a pair of cheap flip flops from thee Old Navy and have been playing around with different strap configurations. I've been really enjoying this setup for the past couple weeks. Still haven't used them in the water, though. 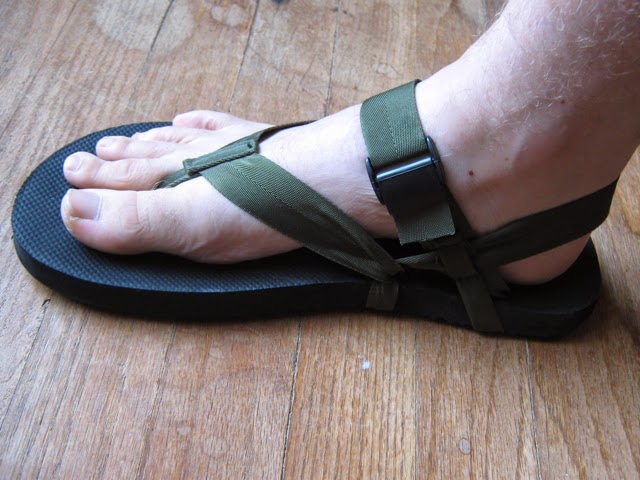 I'm using the 1" 4088 mil-spec webbing I use to bind the edges of my bags. It's lightweight but not too lightweight -- and it works well with the low-pro ITW cam buckles. 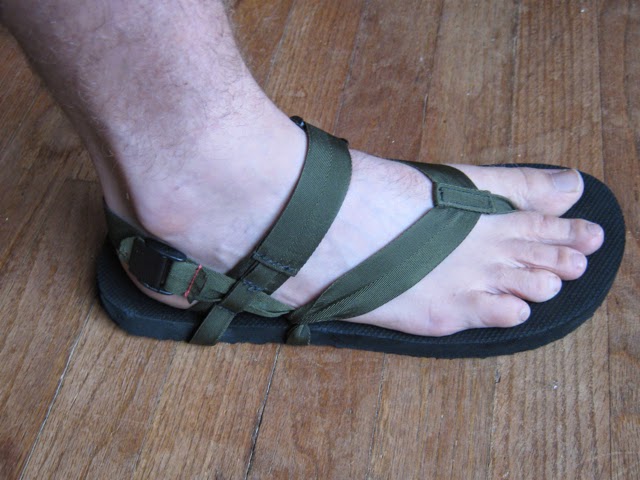 Every strap is adjustable, which I like, since I have such skinny feet. 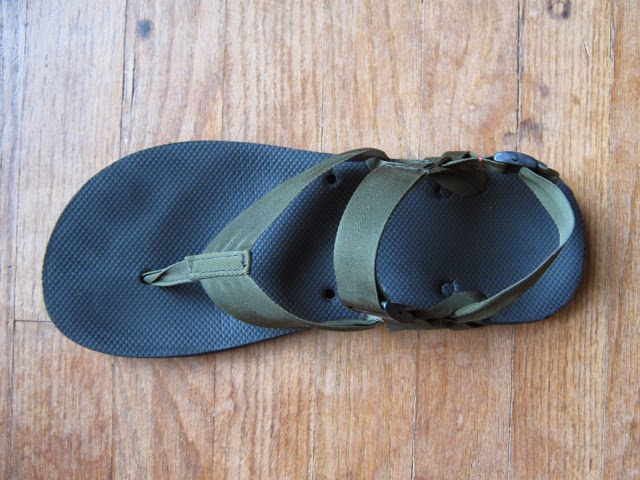 You can see the holes where I had the front straps knotted originally. This was too far forward and I was having the twisting, heel-slipping problem like with the Lunas. The knot is now pretty close to the middle of my foot, under the arch, and seems to balance the sandal better. 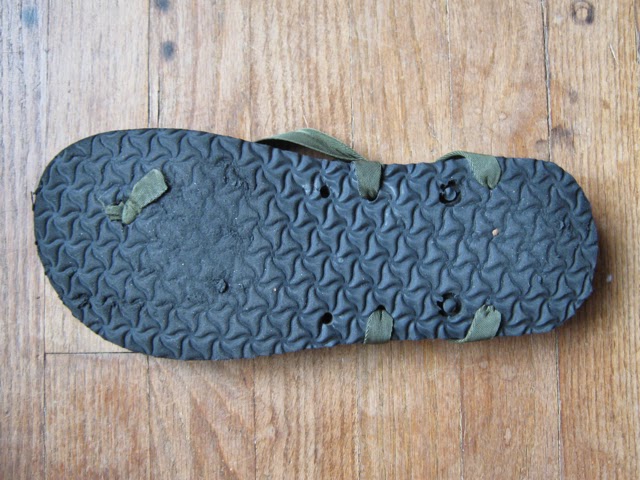 These soles are pretty lightweight and will probably only last a season, if that. After these blow out, I'll get some Vibram Newflex (or maybe just Birkenstock) soles from DIY Footwear and go from there. I don't know if I'll keep the lightweight straps, use heavier poly straps, or mix 'em up.
As you can see, the straps aren't recessed into the sole like with the Lunas. We'll see how long they last. 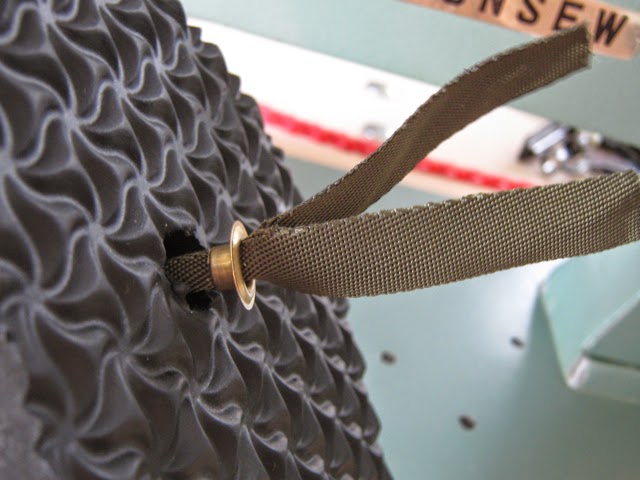 The knot is formed by cutting the webbing down the middle and finishing with a square knot. I've threaded it through a male grommet to give it more structure. I ended up taking this out and flattening it down after it started poking my toes. 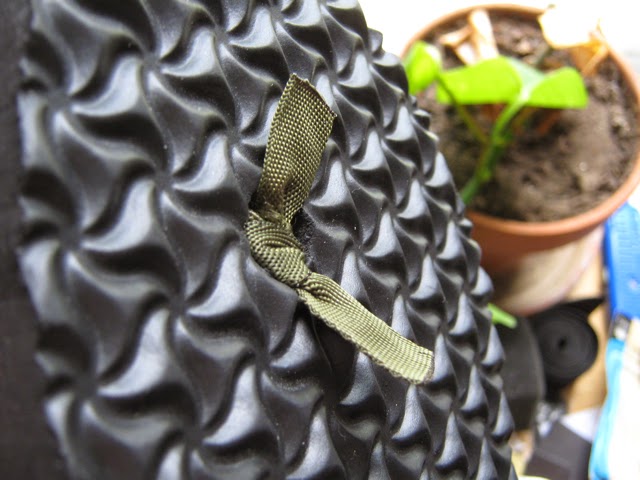 The hole is countersunk so the knot is decently flush.

Made another pair for Jenny's brother to try out: 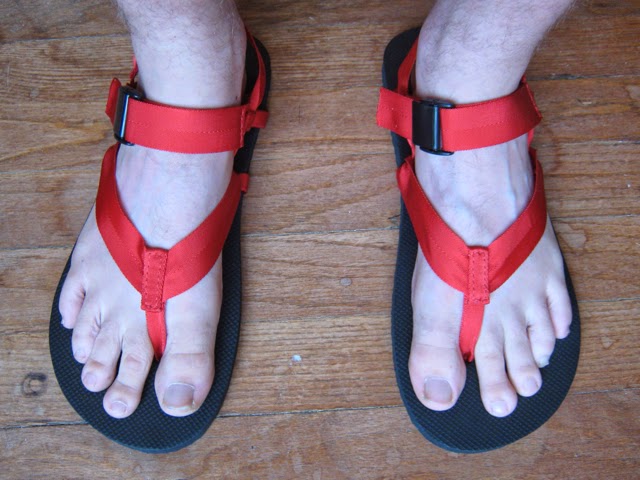 Spaced out and put the buckle on the right side for each sandal. We'll see if it makes a difference. These buckles can be kicked open, but they're generally well behaved. If I use a heavier webbing in the future, I'll have to use a ladder lock or a tri-glide configuration. The heavier cam buckles are too bulky...though I've seen 'em used on sandals. 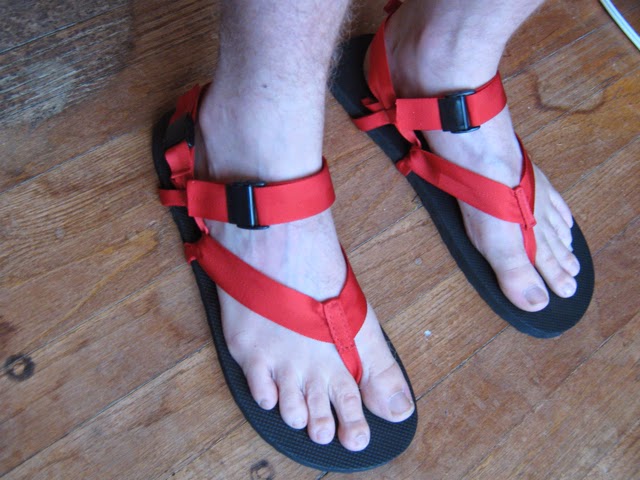 Barefoot runners call their flavor of sandals huaraches. In Mexico, huaraches are any leather footwear (mostly sandals) that are woven with one continuous strip of leather. They're often soled with tire rubber. What American runners call huaraches are known as pata de gallo (cock's foot) huaraches down south. 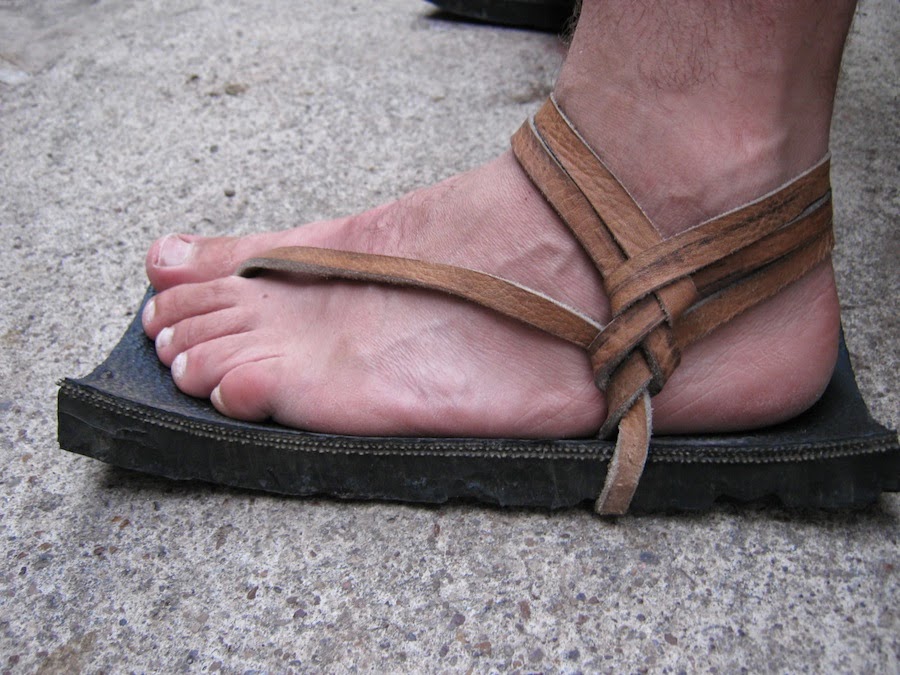 Above is footwear designer Markus Kittner's pata de gallo sandal (and foot). Check out his Huarache Blog for an amazing wealth of ethnographic footwear information. Basically, what I learned from his blog: any strap configuration that you could dream of has probably been made already. 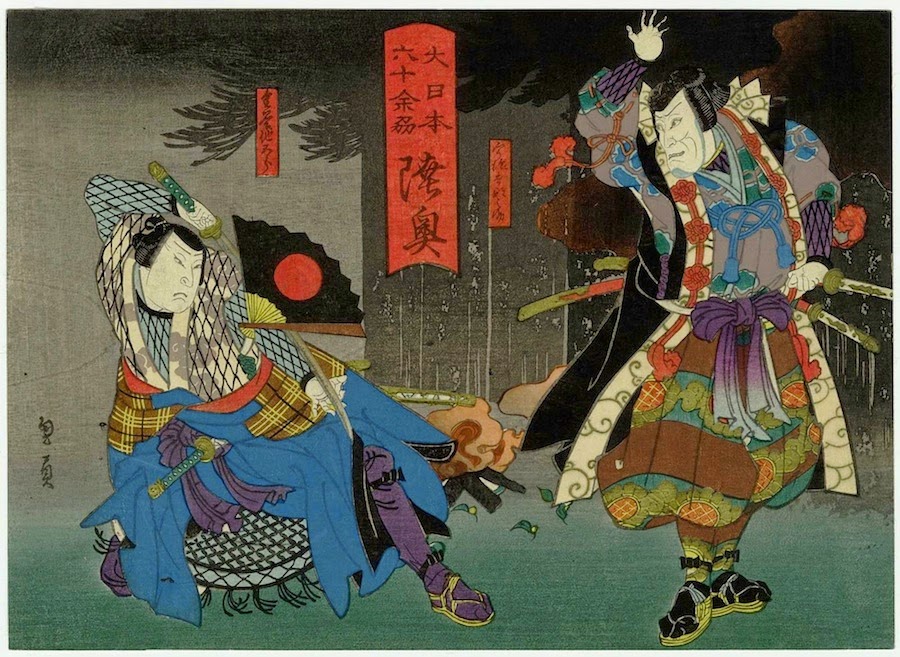 I'll let you know if I come up with anything better. Happy trails.
Posted by cory at 9:10 PM No comments:

Some friends of mine recently took a trip to Madagascar and spotted some furry li'l animals. 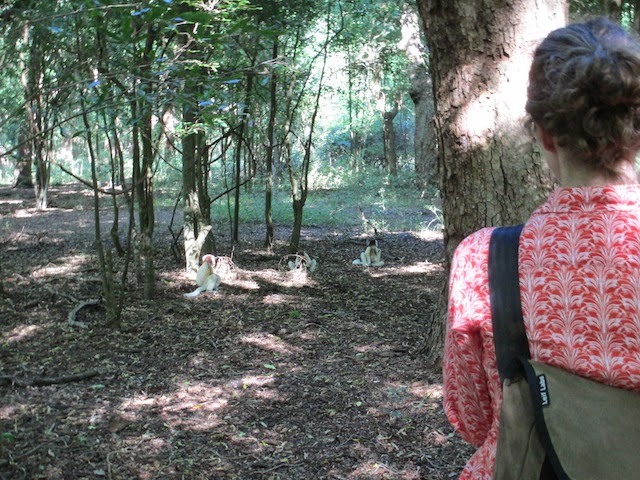 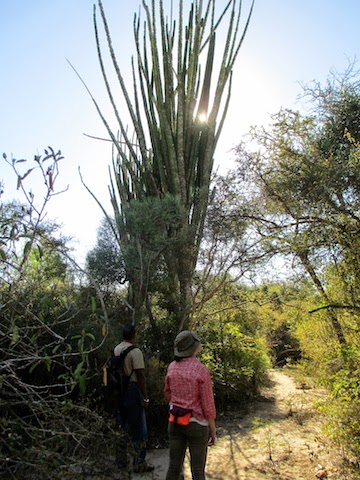