www.tombihn.com/blog/25-years-service-consew-206rb
Posted by cory at 1:03 PM No comments:

I received a squishy package from The New Yorker the other day and thought, Oh cool! a canvas tote. I was wrong: It's the worst bag ever. Which is funny, since last year I got a canvas tote from Entertainment Weekly and it's real nice. Go figure. 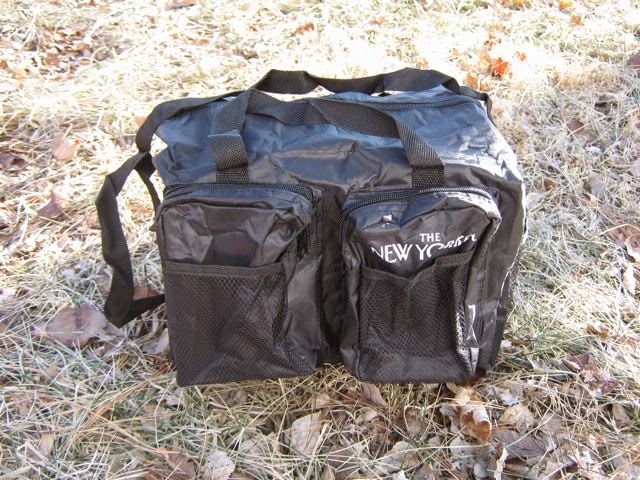 Too big for its own good and made from stinky plastic, with the fixed shoulder strap sharing a seam with the zipper, my first reactions was, The New Yorker is just mailing junk to people! They should've saved their money, lit it on fire, taken a picture of the blaze and then emailed me a copy of that picture with a note saying "We were going to send you some shitty promo-merch gewgaw, but we did this instead to thank you for renewing your subscription." To which I would have replied: "I'm glad you did that, New Yorker — that's much better." But then I calmed down and thought, Hey, you know what, someone probably spent three or four minutes making this sad little bag. I should give it a chance.
So far, I've come up with these possible uses. If you also have a too-big-it's-bad plastic New Yorker magazine bag, maybe this will inspire you: