My watch crapped out on me a while ago and I've had this Wenger watch sitting battery-dead for a few years so I thought I'd give it some new life.
I usually take it to a downtown jewelry shop, but that shop is long closed...and, besides, jewelry shops give me the creeps. It also gave me an excuse to buy a cute new tool: 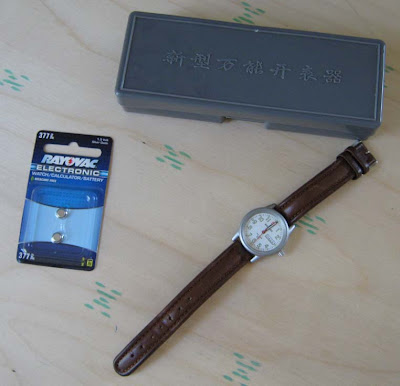 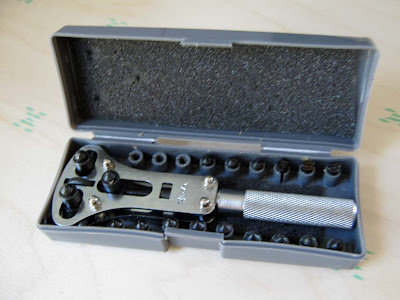 It's a case-opener wrench...or watch wrench...or whatever you want to call it. I call it 99 cents + shipping from China. Awesome. And it's surprisingly well made. All those doodads around it are different tips, to fit all your various watch crevasses. 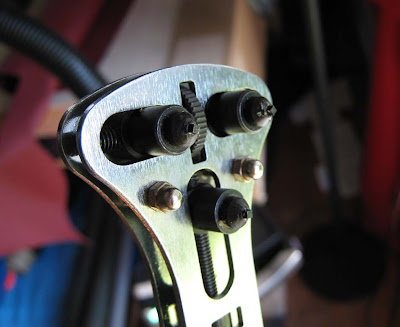 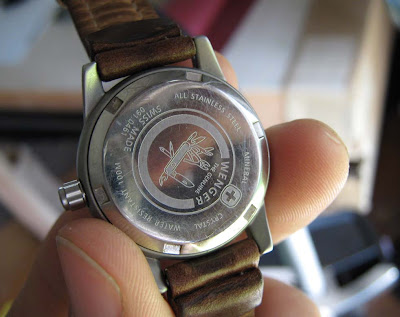 Here's the back of my watch. Pretty typical, I think, for a water-resistant watch. Lefty loosey. 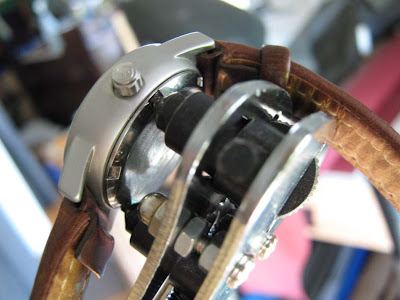 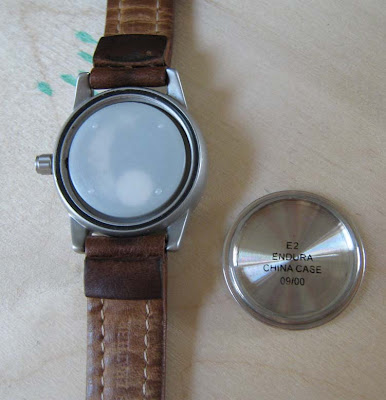 Funny, it says "SWISS MADE" on the back of the watch, but the inside says "CHINA." Go figure. 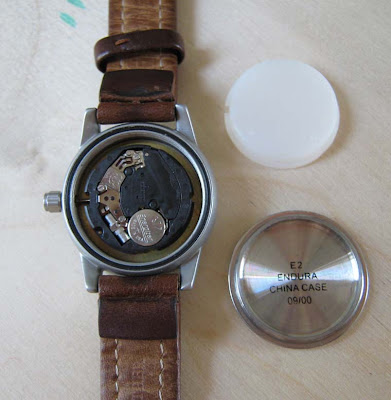 Pop that white plastic case off and there's the battery. 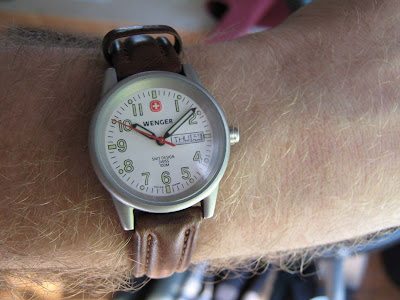 Boom. Working watch.
Posted by cory at 12:07 PM No comments: 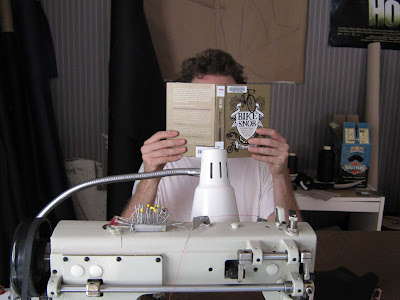 And I found this paragraph on messenger bags to be a little weird, too:

"However, for the on-the-bike use, messenger bags aren't always the great choice everybody thinks they are. This is because they're designed to swing around from rear to front quickly and without being removed. This is great when you're stopping every two blocks to deliver a package; but it's not such a great thing when you're just going from one place to another and you keep having to push your bag back around every five minutes. If you're not constantly going in and out of your bag, you very well may be much better off with a regular backpack."

This is a pretty cheap dig. Stabilizer straps (which prevent the swing-around effect) have been on messenger bags for at least a couple decades, and every respectable messenger bag has one. I imagine Bike Snob needed some more ammo for his Hipsters Suck chapter so he made a factual omission. It happens.

I did appreciate his calling huge empty messenger bags "hipster capes." He's forgetting, though, that hipsters rarely wear appropriate clothing, so their bags actually do keep the chill off their backs.

But really, can you even criticize someone (Bike Snob, not hipsters) who hides behind the mask of curmudgeonry?

Anyway...so, if you're new to cycling, give this book a look over. It's accessible and pretty funny. Otherwise stick with the blog: http://bikesnobnyc.blogspot.com/
(If you haven't read the blog, it's awesome.)
Also, thanks go to Daniel Boone Regional Library for procuring this book for me.
Woo! libraries!
Posted by cory at 9:27 AM No comments: 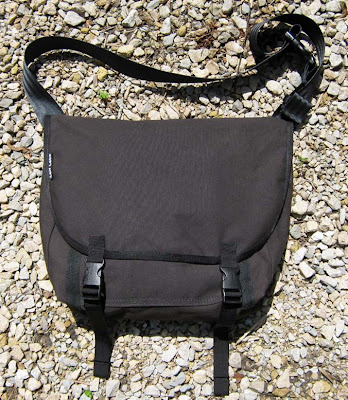 I still need to tweak the dimensions a bit. This is 13" high and 4 inches thick. I think it could be shorter...though the thickness is good.
It comes with a padded back. 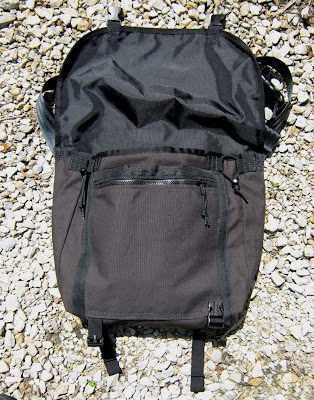 This bag is, of course, named after the Babbitt in Sinclair Lewis's 1922 novel--that indomitable businessman and ultimate conformist, Mr George F. Babbitt.

"They admired and loved one another now. They went profoundly into the science of business, and indicated that the purpose of manufacturing a plow or a brick was so that it might be sold. To them, the Romantic Hero was no longer the knight, the wandering poet, the cowpuncher, the aviator, nor the brave young district attorney, but the great sales-manager, who had an Analysis of Merchandizing Problems on his glass-topped desk, whose title of nobility was 'Go-getter,' and who devoted himself and all his young samurai to the cosmic purpose of Selling--not of selling anything in particular, for or to anybody in particular, but pure Selling."

"'At that, though,' announced the first, 'they're selling quite some booze in Zenith. Guess they are everywhere. I don't know how you fellows feel about prohibition, but the way it strikes me is that it's a mighty beneficial thing for the poor zob that hasn't got any will-power but for fellows like us, it's an infringement of personal liberty.'"

"Silent, they loafed on the edge of the wharf, swinging their legs above the water. The immense tenderness of the place sank into Babbitt, and he murmured, 'I'd just like to sit here--the rest of my life--and whittle--and sit. And never hear a typewriter. Or Stan Graff fussing in the 'phone. Or Rone and Ted Scrapping. Just sit. Gosh!'"
Posted by cory at 2:07 PM No comments:

Things are finally starting to come together here at Leif Labs.
I finally put a table extension on the 1541S table. And a pencil organizer. Pretty sweet. 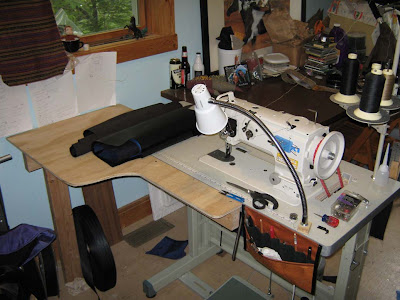 It'd be nice to have an even bigger table extension...but I'm low on space and high on junk (that's in my room). Ideally, I would've got a 4x8 sheet of plywood, cut a sewing-table-sized hole in it and plonked it right down. Would've been awesome.
The 1541S has been sewing better since I replaced the hook assembly, though not perfectly. It still chatters sometimes when going over seatbelt webbing. Makes me nervous. Hopefully it just needs to break in. 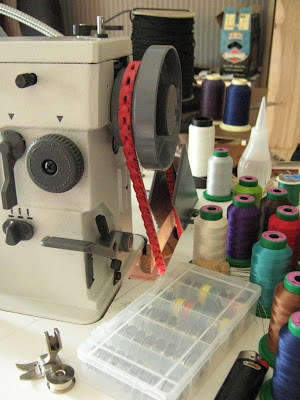 Finally got rid of that black-tar belt on my 20U. Not only was it stinky, it was a little uneven, so it made the machine shake. This should be better. 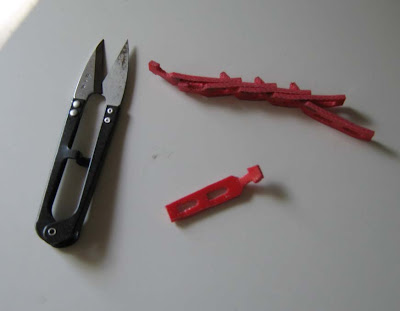 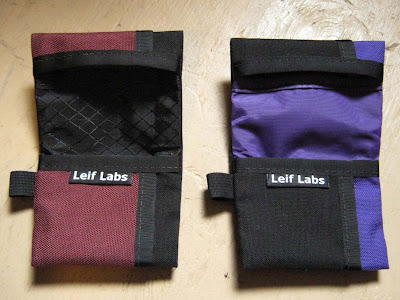 Extra-pocketed wallets.
Posted by cory at 1:52 PM No comments: 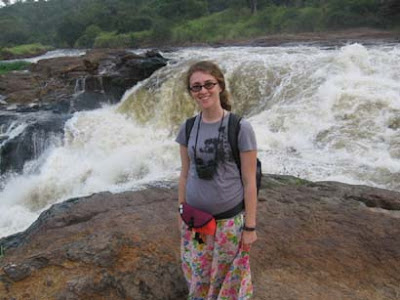 My friend Linds sporting her hip pack in front of Murchison Falls in Uganda.
That's the Nile when it gets real narrow. Pretty cool.
Posted by cory at 6:08 PM No comments:

Finally getting my Juki 241 set up as a binding machine. I still have to order a motor belt and get my thread guides (which were mysteriously missing), but we're almost there. Woo. 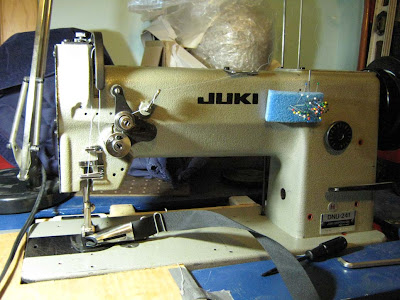 This is a right-angle binder. These are good for attaching binding around curves. 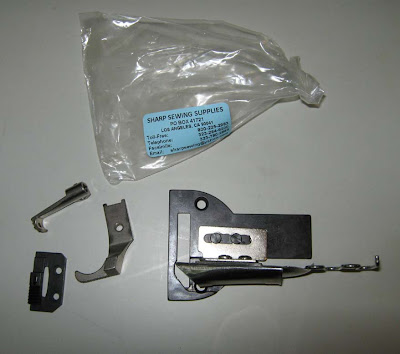 Needle plate, folder, feet and feed dog.
This is the only off-the-shelf binder set I saw on the Internets for my type of machine (the Consew 206/Juki 241 unison-feed school). It's sold by a few different people out there, but I got mine offa eBay. I have no idea who makes it. Totally generic.

All the sewing shops I talked to only make custom binders (or order custom binders from somewhere else). You send in your binding and materials and samples of your sewn goods and they make you a binder. That's pretty cool, but it's also 3-4 hundred dollars.
Check out Atlanta Attachment Co. and New York Sewing Machine Co.
I was also told by Juki Am. that Bill's Sewing in NC is a good place to get attachments.

My intended usage is probably a bit more varied than a sewing factory's, so I thought I'd risk getting an off-the-shelf model. The risk, of course, is that it'll be a little too big and won't work properly with thinner material.
If that's the case, I'll order another folder and try my hand at soldering. Ha.
But I'm hoping that with this machine's compound feeding action it'll handle thickness variations better than other machines. 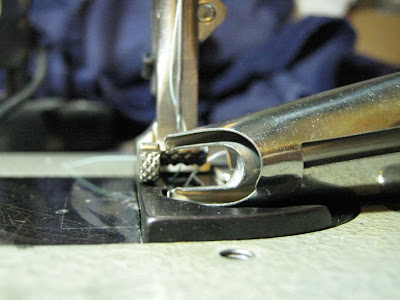 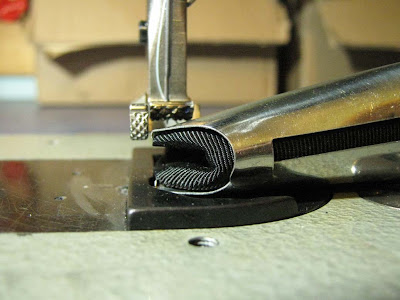 Get in there, grosgrain! 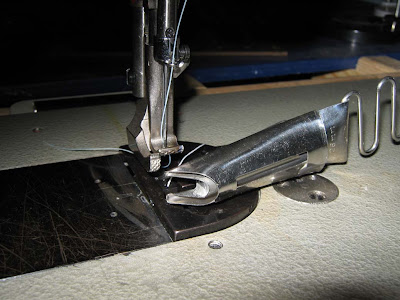 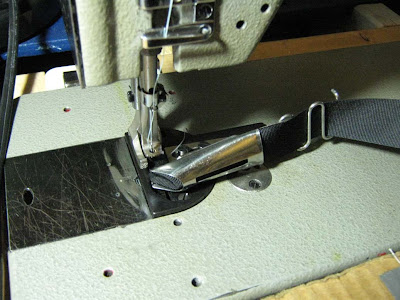 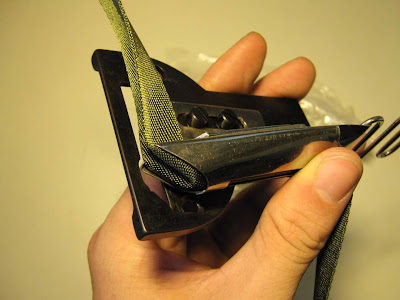 I was worried that my thicker 4088 binding wouldn't feed properly, but it's not a problem. Yeah.
Posted by cory at 5:35 PM 4 comments: