How to replace a buckle with an awl

We're gonna replace a buckle on a bag with a sewing awl! On my bags, most flap buckles are sewn through the shell and the liner so they're pretty easy to replace.

If you don't have a sewing awl ... get one! You can buy a new one for like 25 bucks on eBay right now (plague year 2020), or from your local hardware shop (prolly for around 30 USD). You'll be able to fix pretty much anything you need to put a lockstitch in. Before I had an industrial sewing machine, I used an awl to sew thick bits of webbing, seams and foam. Even after I got a Sailrite Ultrafeed (semi-industrial, or artisan-grade) I still used an awl to sew 1/2" foam. And I still use one to sew inside of things I can't get a machine into, like shoes.
If you don't want one, that's fine. You can use a heavy needle plus a thimble and pliers and do a saddle stitch, or a running stitch that you go over twice.

Oooor, if you don't want to sew at all, there are a few no-sew replacement buckles out there. Just wiggle the slotted bar into the webbing loop and you're good to go. 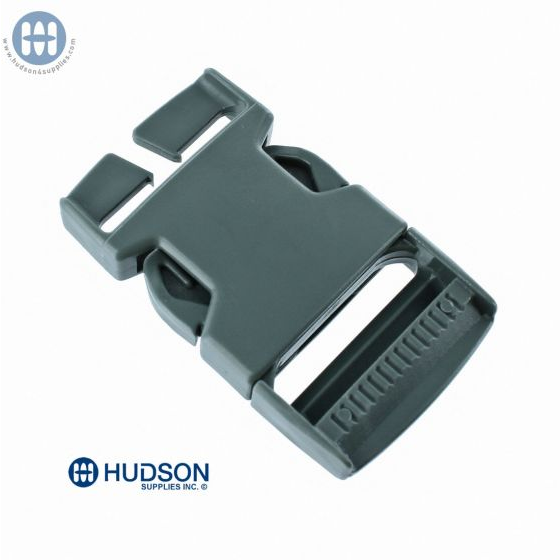 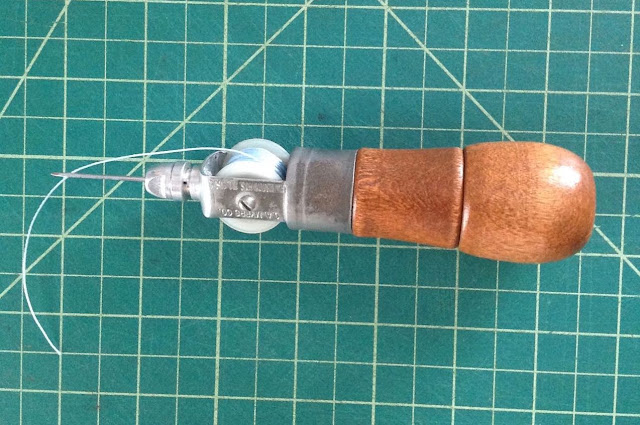 I'm a big fan of the Awl for All. It's simple and you can control the bobbin tension/slack with your finger. The other big-name awl out there is the Speedy Stitcher. The spool is in the handle and it threads through the body of the awl. It looks clean, but I think you just have to hold on to the thread to keep it under control... 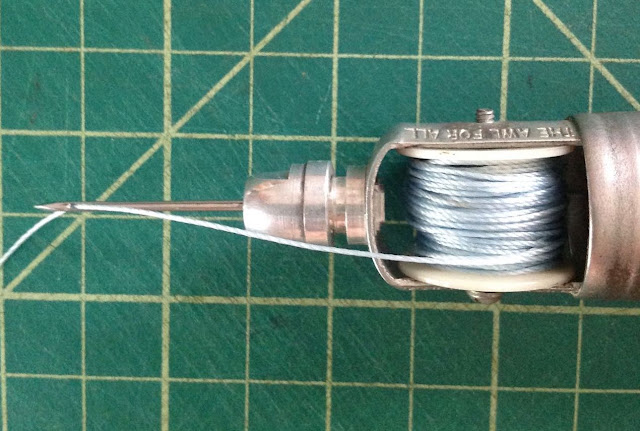 Thread. I'm using a super-heavy nylon thread here for illustrative purposes (T210). Most messenger bags are sewn with between a T70 and T135 (#69–138) thread. I mostly use a T90 (#92) bonded polyester thread on all parts of my bags, unless it's something really lightweight. You'll probably use the thread that came with your awl. If you found your awl in, like, a random drawer at your grandparents' house and the thread's rotting off, you might be limited to "upholstery," "jean," or top-stitching thread at the local sewing shop. Get something heavy in nylon or polyester and it'll be fine. 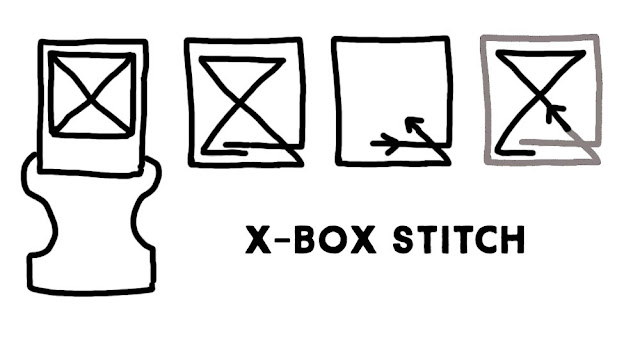 This is the stitch shape that we're gonna make. I call it the x-box stitch ... because it's an X in a box. :) It's the shape you see most on factory-built bags. In a factory setting (or if someone has ALL the machines), it's sewn with a shape-stitching sewing machine. On artisan/cottage-built bags, you'll often see some variation of this -- usually with a line or two missing ... Z, open-box, two parallel stitches, hourglass, &c. On a big pack, these alternative shapes are easier to sew with a normal flat-bed machine ... since you don't have to jam the whole pack under the machine arm a couple times to sew the box. Since we're not limited by a machine, we're doing the classic x-box.

There are many ways to get to the x-box, but above is the path I usually travel. 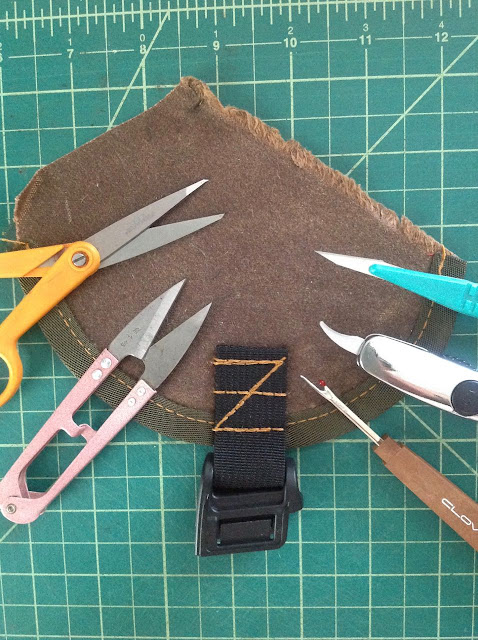 Use whatever sharp tool you have at your disposal ... seam ripper, razor blade, nail clippers, whatever. If possible, DO NOT remove all of the buckle webbing -- just enough to get the buckle off. It'll be a lot easier to sew the new buckle in the same place if there's a bit hanging on.
Here's what the webbing might look like. Notice where the top of the webbing terminates under the fold. Cut the thread up to there: 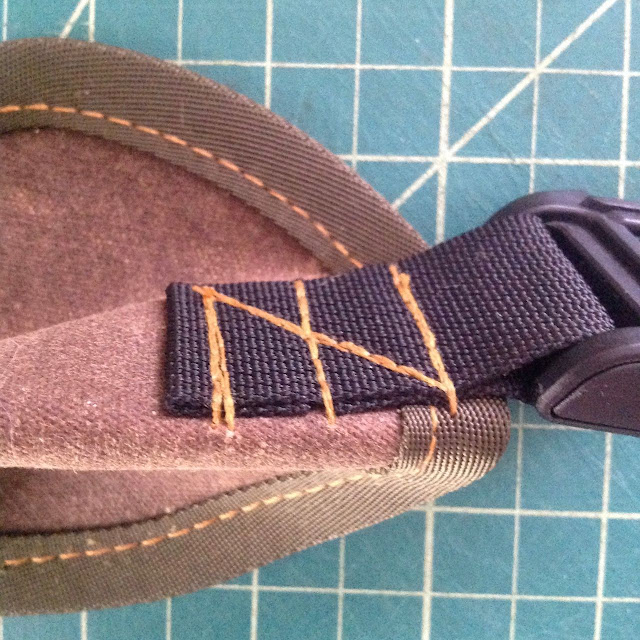 You can kind of see the end of the webbing there -- right to the left of strikethrough in the zed. 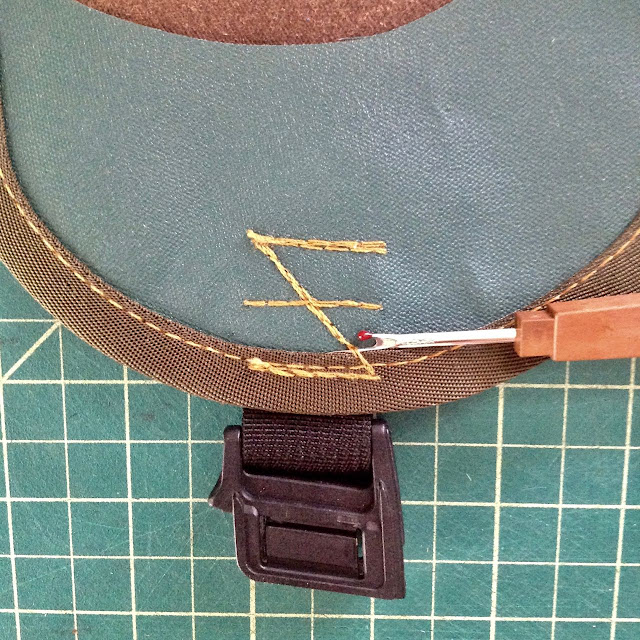 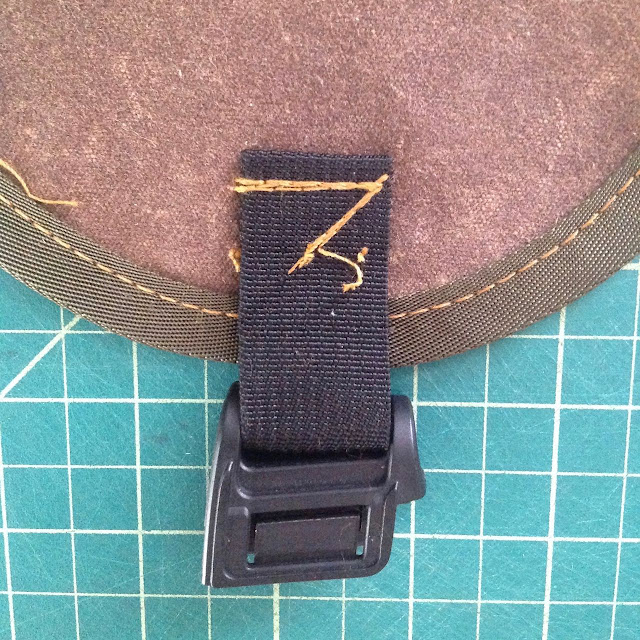 That's a good place to stop on my buckles. Assess your situation before cutting. On some bags, like Timbuk2, you might have to remove all the webbing to get the buckle off. I recommend marking around the webbing with something that will wash off so you can line it back up later. If the webbing is sewn into a seam, you might have to cut the webbing if you don't have access to the back of the seam and either splice the webbing back together if there's enough slack, or add a new piece of webbing on top of the edge (if it's an edge situation). 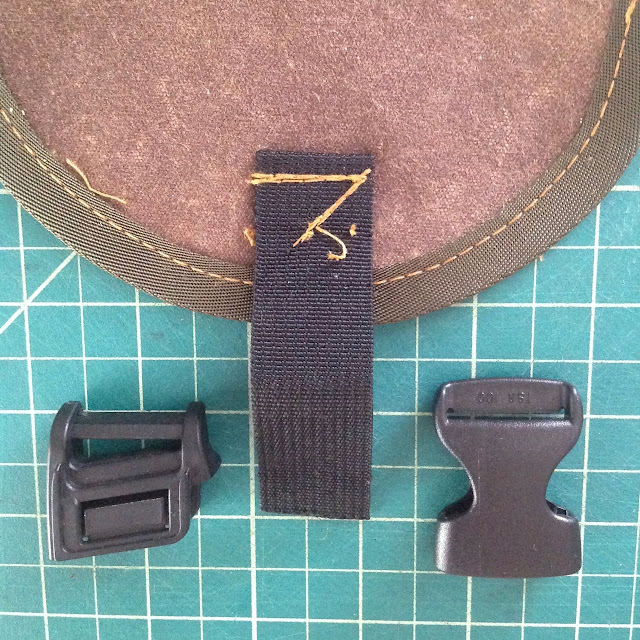 There we go. Old buckle's off, new buckle's ready to rock. 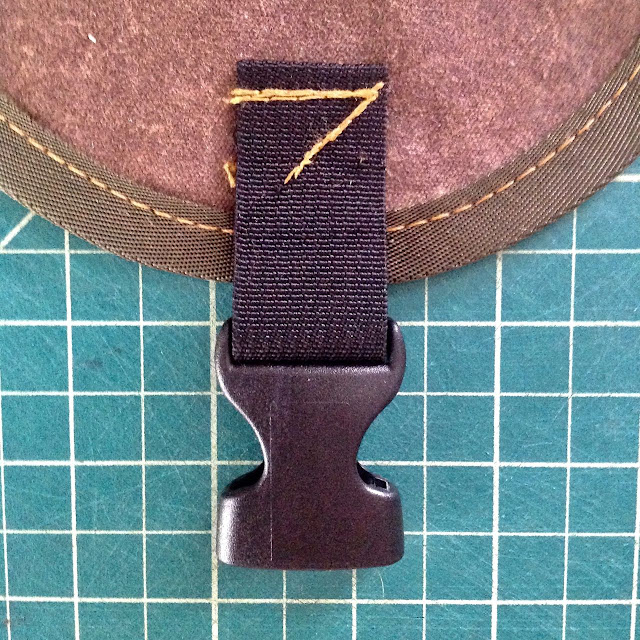 And jam the new buckle in. If you really want the webbing to stay put, you can put some glue under the webbing. Okay, now it's time to sew. [I recommend practicing on some cardboard first if this is your first sewing project with the awl.] 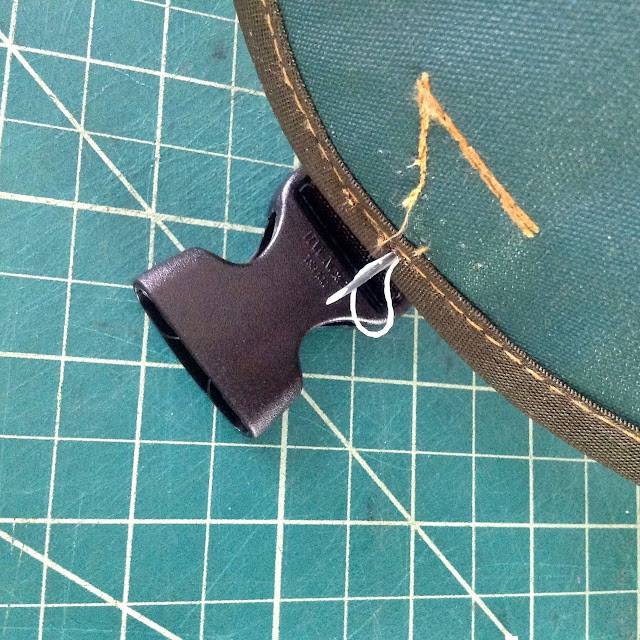 First blood. I like to start on the stitching line closest to the buckle and near the middle of the run. This kind of locks the webbing in place and minimizes webbing creep as you sew. Stick your needle straight down and pull back about an 1/8" or so until a loop forms bellow the needle's eye. This will be on the opposite side from the needle groove. [On most machine needles, this would be where the scarf is, but there's no hook in play here, so no need for a scarf.]

Grab hold of that loop and pull the loose end of the thread through. If you're familiar with machine sewing, this is going to be your "bobbin," or bottom, thread, and I'll refer to it as such.

Pull out enough thread to get the job done. Rule of thumb is twice the path length. I pulled out about 22" and that worked well.

If you find that your thread wants to untwist easily, see if you have any wax lying around and hit that thread with some wax. Wax of the bees, if possible. It should make your life easier. 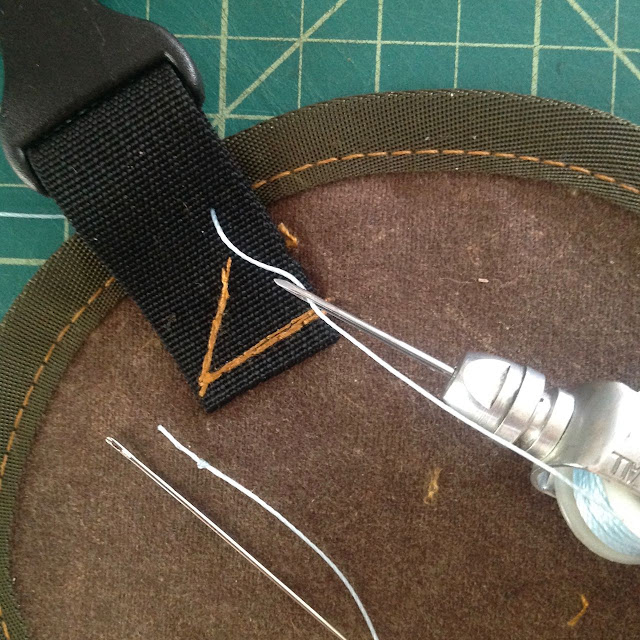 Here we are after pulling through the starting length of thread and about to make our first stitch. I like to tie a knot at the end to make threading the stitch loop easier and keep the thread from untwisting. If you wanna go nuts, you can even use a needle on this end. [I'll do this if I'm doing a really long run.] Since this thread is so big and unravelly, I gave it a blast of fire to seal the end, too.

Stitches per inch. If you're just replacing one buckle, see if you can match the SPI of the other buckle. On a one-inch strap, this could be 6 to 8, depending on thread size.

Penetration. For dense material, I use a slight twisting motion and hold the material in my hand. I feel for the tip of the needle and then shoot it between my fingers. This is probably NOT the method you want to start with. Try laying the material on a piece of wood or cork and pressing into that. That way you can get a nice vertical stitch and you won't stab yourself.

Consider drawing a line to follow. I did not and you can tell. :) On black webbing, a light colored pencil makes a good fabric marker. 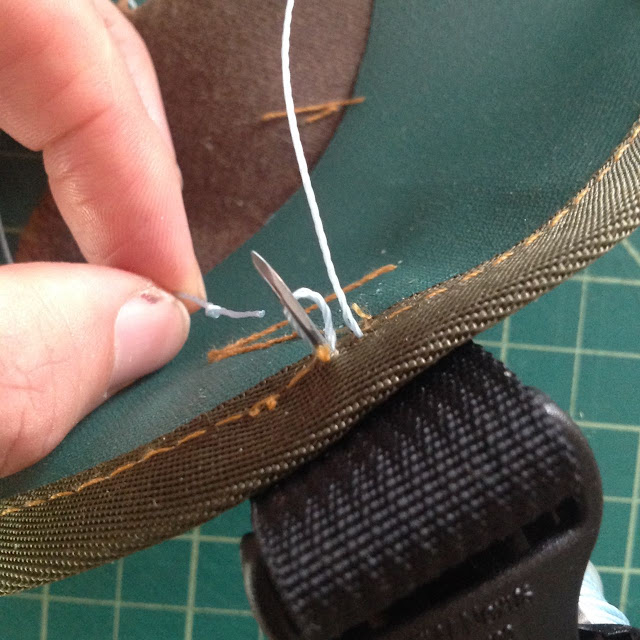 Okay, above is the first stitch. From this angle, I'm sewing right to left. Needle groove is facing left. When I pull the needle back to form the loop, the loop is on the right side.
I'm about to thread the loop. After I do this, I'll pull the "bobbin" thread tight and pull the loop into the material with a bend of bobbin thread. In lockstitch terms, is is called burying the knot. Ideally, the stitch should look the same on both sides. More on this later. Let's go through all the steps to make our second stitch: 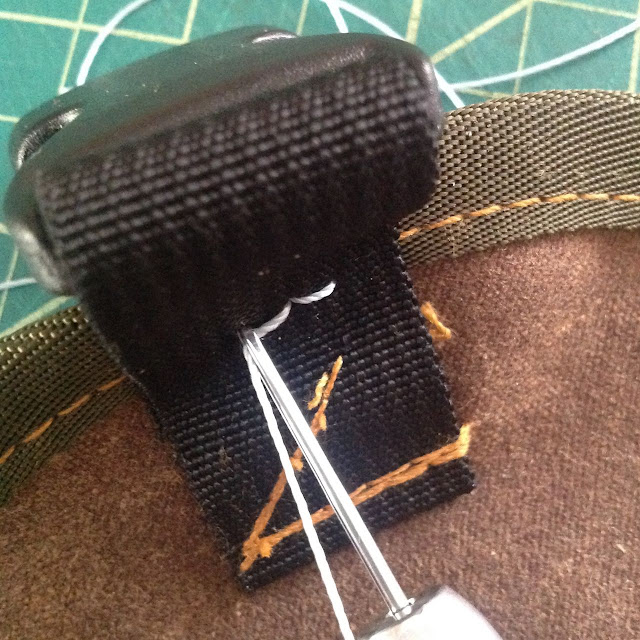 Second stitch. Sewing right to left. About to push the needle through. I probably have too much tension on my top thread. This could pull the previous stitch out of place. 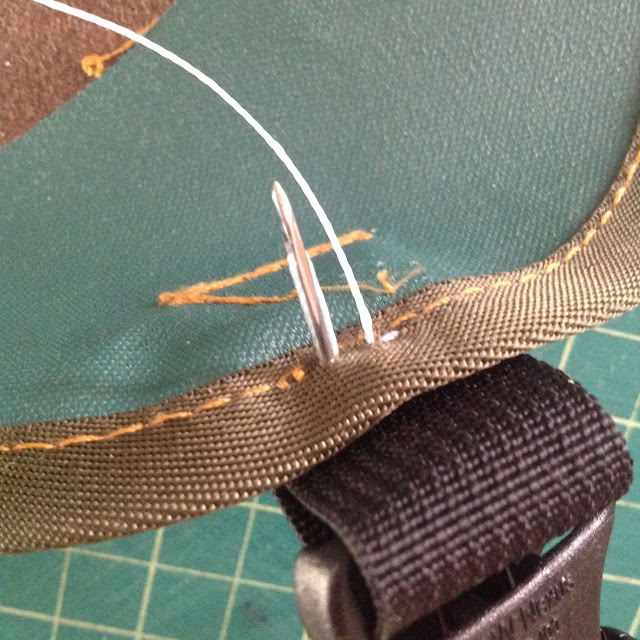 Second stitch. Post-penetration. Note how the thread is tensioned on both sides of the needle. 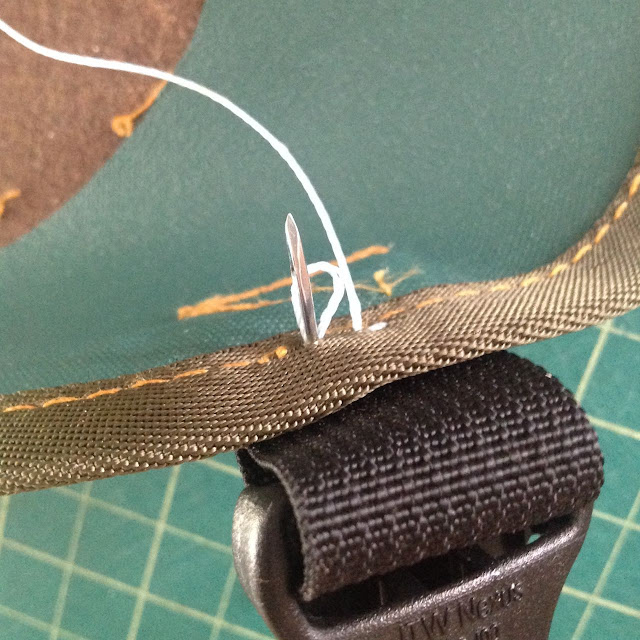 Second stitch. Making the loop. You can go through either side of the loop with your bobbin thread. Just try to keep it consistent for a cleaner line. 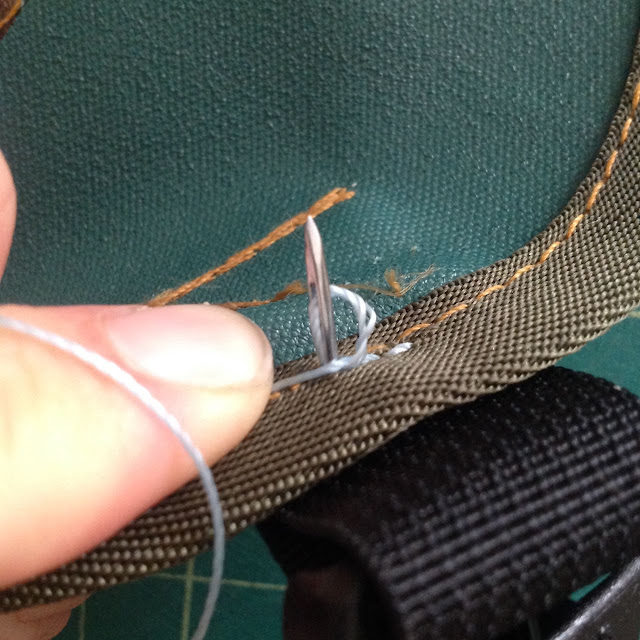 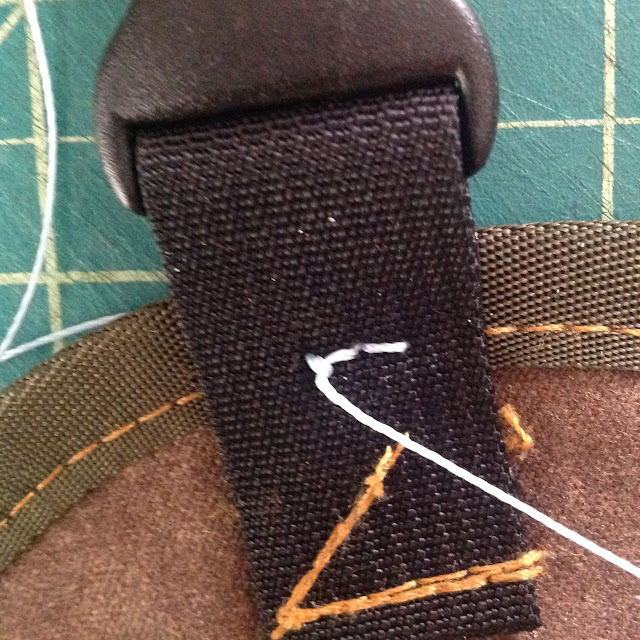 Second stitch. Sometimes I'll pull the bobbin thread all the way through with the top thread (you can see it looped there, coming out of the hole) and then pull on the bobbin thread to seat the knot. It's a feel thing that you'll develop. 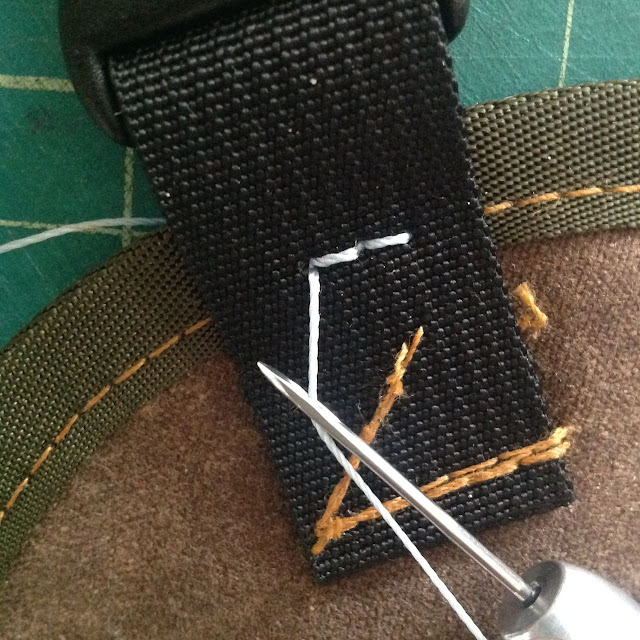 Second stitch. Burying the knot (pulling on the bobbin thread here). You can see I had a little too much tension on the top thread and it pulled the first knot out of place a bit. Not terrible, but something to think about. Also, using a dark thread will hide your mistakes better. And not using a fat-ass thread like this will make it easier to bury the knot, too. :) 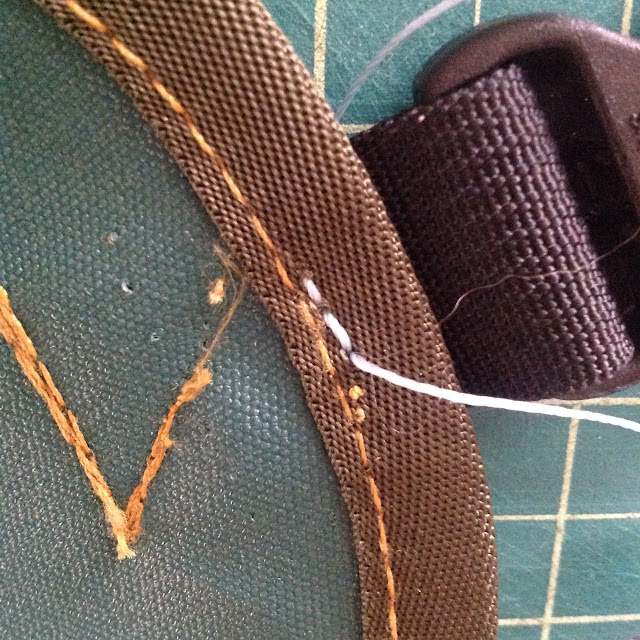 Second stitch complete, underside. Note that you can't see the top thread knot in the stitch holes. That's what you're looking for, a buried knot, on both sides.

Okay, now that we've broken down a stitch, let's get movin'. 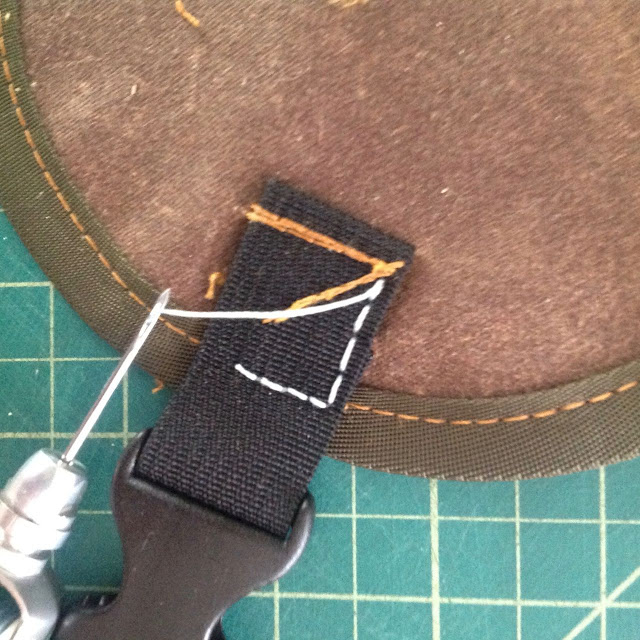 I've finished the first side and worked up the second side of the box. Be careful when turning the corner that you keep the needle groove facing forward. It's easy to flip the awl around when changing directions. At this point, you can remove the rest of the original stitches. (I'm gonna leave 'em 'cause I'm doing this fast and dirty.) 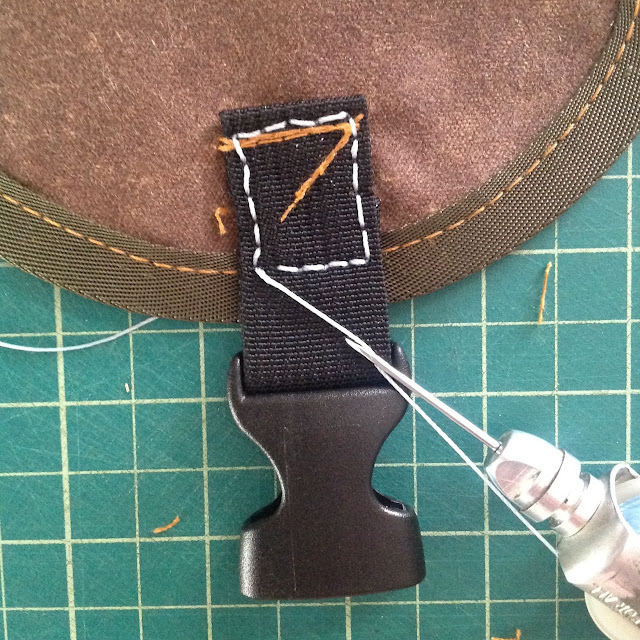 Box is done. I did a pretty good job of burying the knots ... but the stitches are really crooked. Ha! 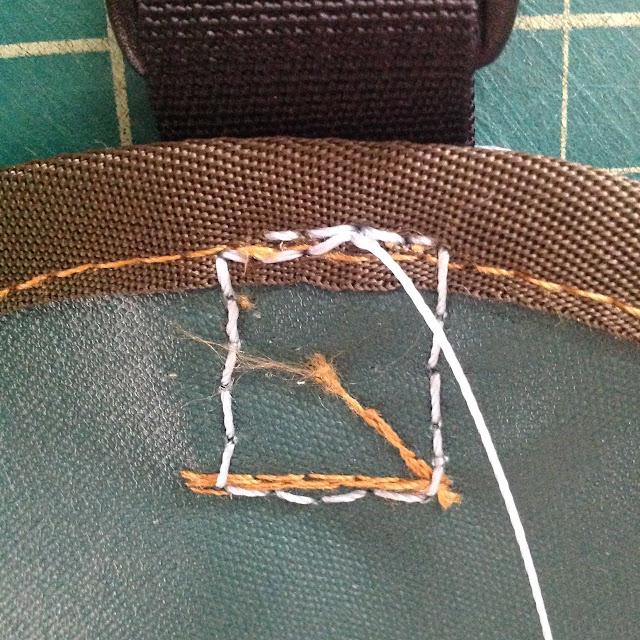 Overlapping the bottom edge. You can see I'm getting some needle deflection here, where the bottom hole is not in the same position as the top. If this happens, pull the needle almost all the way out and redirect. Or don't worry about it 'cause it's on the bottom. :) 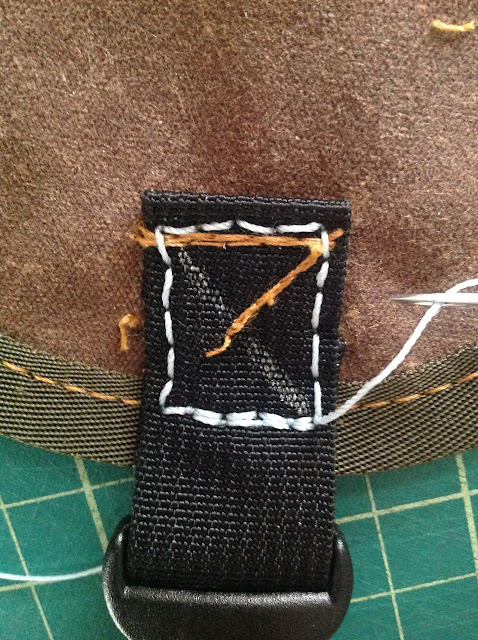 Bottom-edge overlap completed and I'm about to stitch the first part of the X. I've drawn a line to see if that helps me sew somewhat straighter. 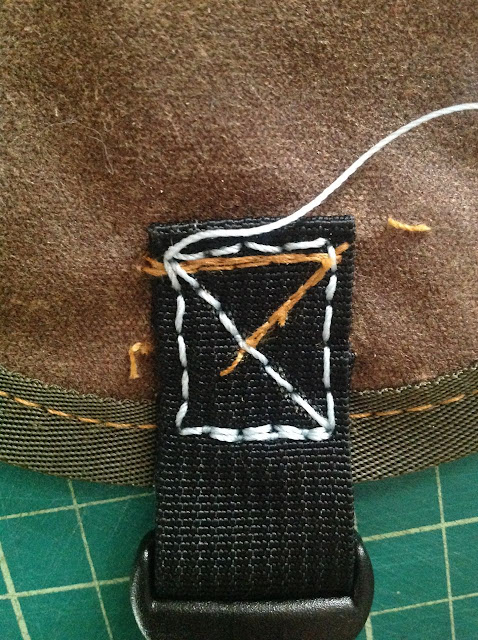 First cross done. 'Bout to overlap the top edge and do the second cross. That middle knot looks real bad. Pulled the top thread too tight. :) 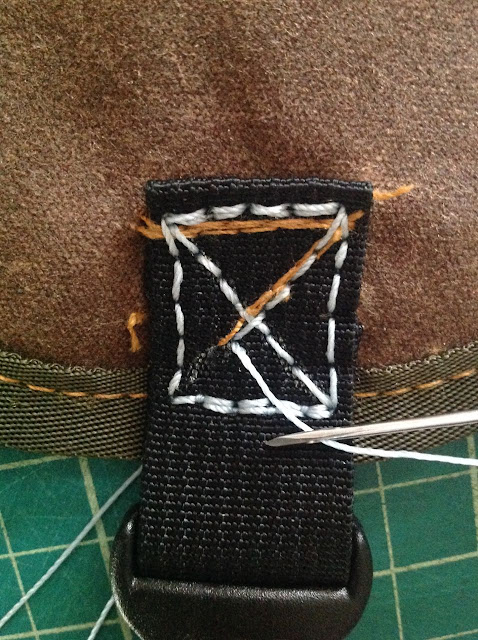 Those look a bit straighter. 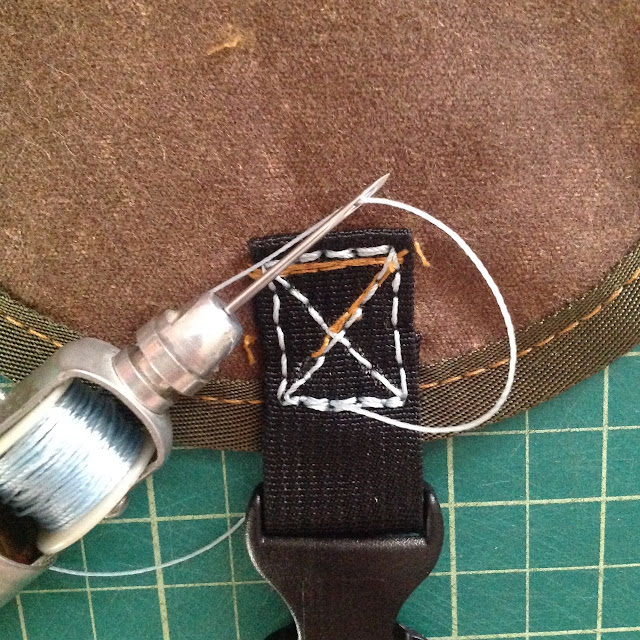 And here we're at the end of our run -- so soon! I like to overlap the final line by one or two stitches. If you want a really clean look, finish on your first hole. 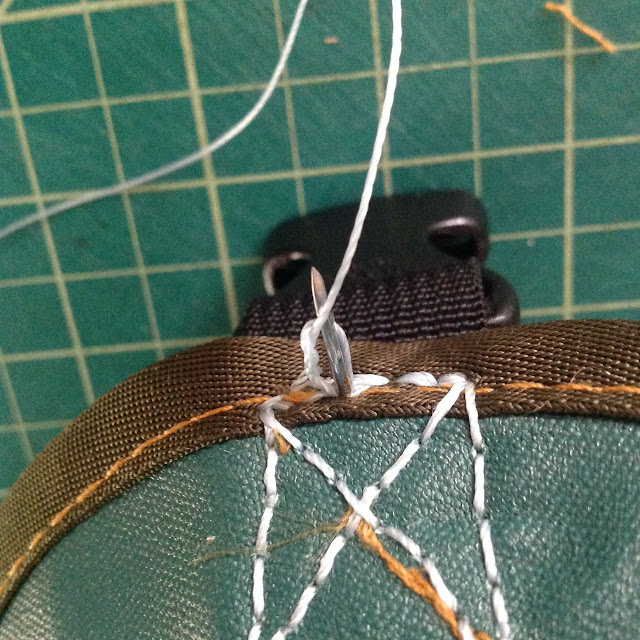 I like to pass my bobbin thread through the loop twice on my final knot so it's extra secure. Kinda ridiculous with a thread this heavy. Pull really tight on both ends. 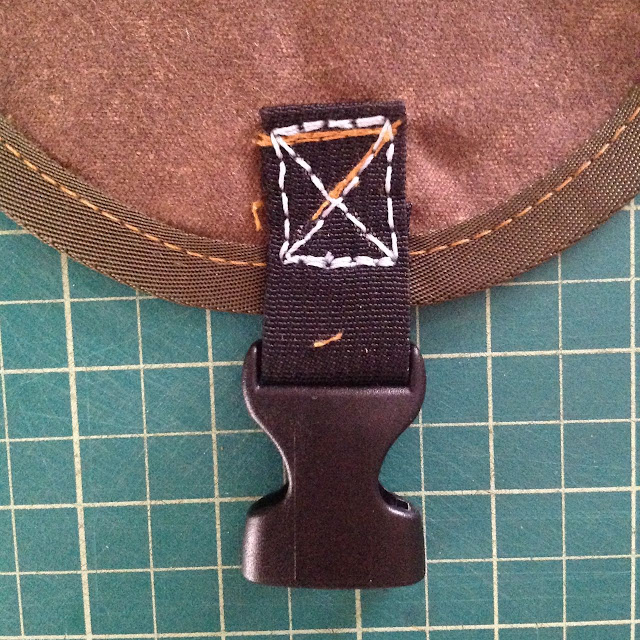 Snip off the loose thread on both sides and you're done! Depending on how slick your thread is, you might want to melt the ends or hit it with some superglue. That buckle ain't going nowhere! 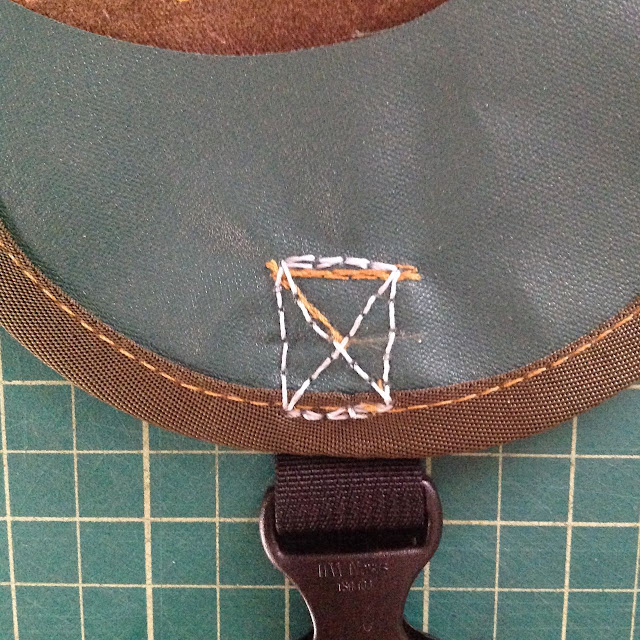 The bottom looks pretty close to the top ... just a little wonky. :)

If you just read this and you're like, "That's pretty cool ... but where do I buy, like, one buckle?" here are some options:
EBay. This could be your cheapest shipping option as most small items are mailed USPS First Class, though mark-up for one buckle could be severe.
Outdoor Wilderness Fabrics. If you need some webbing too ... or really anything to make a bag.
If you want to upgrade to those safety-rated metal buckles you see on fancy tech messenger bags, you can get Cobra buckles from the source: AustriAlpin.
Hudson also carries Cobra buckles and just about everything from ITW/Fastex.
If you're looking for one of those magical magnetic Fidlock buckles that you saw me use as my "broken" buckle, check eBay. I don't know if they have a US distributor yet. I had to order my samples from Germany.
And for more hardware resources, visit my website.
Also, check out your local sewing shop, hardware store, or army surplus depot. Sometimes you can get lucky and find a high-quality buckle in town.
Have fun fixin' your stuff! :)
Posted by cory at 1:18 PM 2 comments: