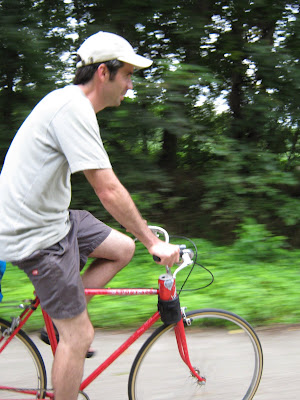 A single drink holder. Twenty-four ounces of fun.
I'm still thinking of a good name for the single bike coozie, so if you've got any lemme know. I'm leaning towards The Shotgun...as in "riding shotgun." Thanks, Bill.

Well, looks like I haven't forgot how to make a bag...
This 19incher is a raffle prize for the True/False Film Fest's summer event, the Boone Dawdle...which happens tomorrow.
I think the bag turned out pretty nice. 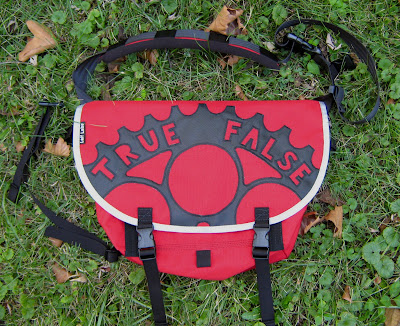 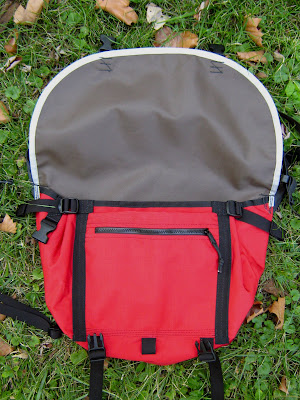 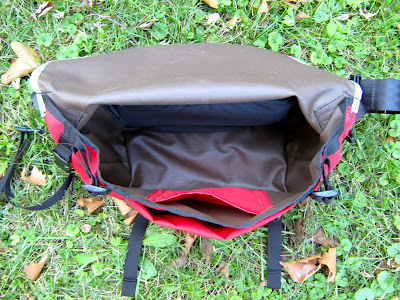 Photos from the Dawdle: 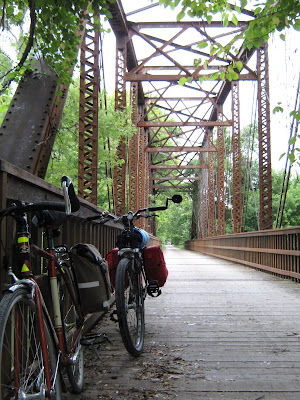 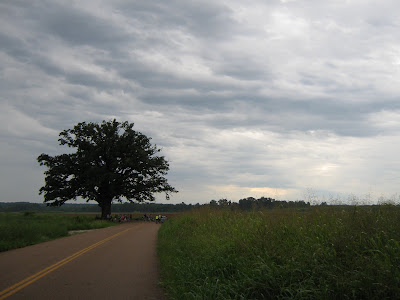 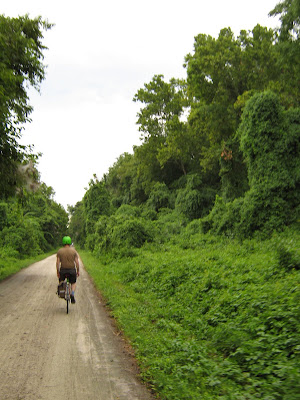 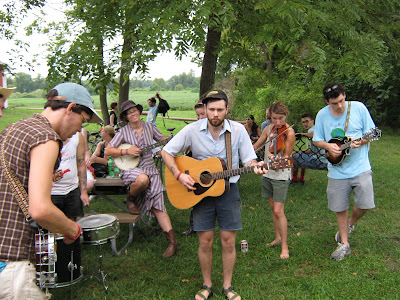 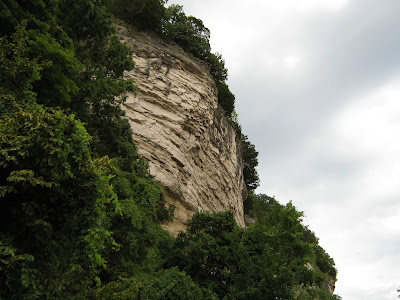 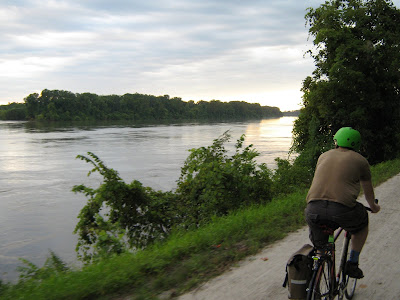 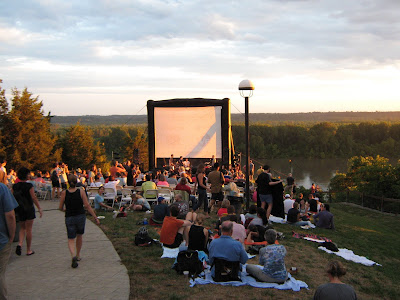 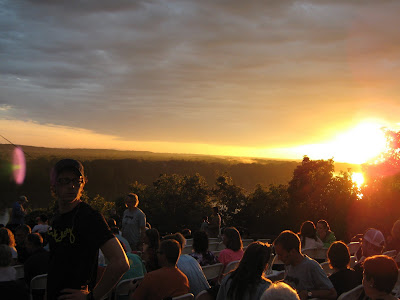 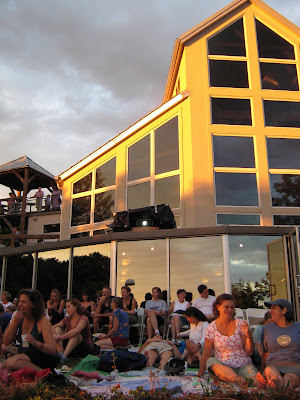 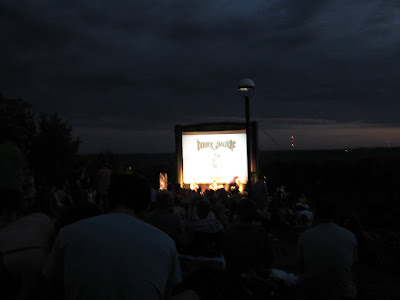 It was a fun-filled fifteen-mile ride out to Missouri wine country. There was a nice light rain most of the time, which magically cleared for a screening of Last Days Here, a Sundance doc about the ups & downs of doom-metal rocker Bobby Liebling. Lights passed silently behind the screen from Interstate 70, cell phone towers did what they do, the engorged Missouri River flowed east, we ate corn on sticks and drank beer, and we all laughed when Bobby lost a crack rock in his parents' couch.
Good times. 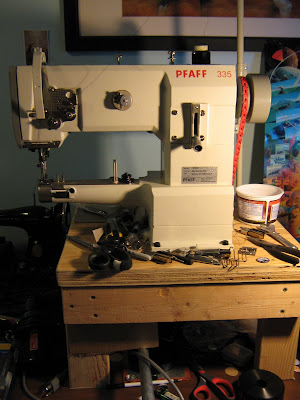 I can't even remember when I bought this thing it's been so long. It was cold, I know that. Probably the winter...definitely the winter. Anyway, I've been busy with things, and there have been complications with this machine and so on. But! I have built a table for it and I am using it now...so that's a step in the right direction, as they say.
So let me show you what I've got...

This is what is known as a narrow-arm cylinder-bed sewing machine. Cylinder bed (aka cylinder arm) sewing machines are good for sewing hard-to-reach or difficult-to-sew things like hats, bags, golf bags, what have you--anything that's a real bitch or impossible to sew on a flat bed machine. [See also post-bed sewing machines.]
It is my understanding (which is limited) that there are two varieties of bottom feeding on cylinder machines: horizontal and elliptical (they might be called something else in the industry...). Horizontal is what you find on narrow arm machines like the 335. The feed dogs are attached to an arm that goes forward and backwards and that's all. Elliptical (and its fancier square variety) go forward, up, back and down. This is what you see in all (or most) flat bed machines. Unfortunately, you can't fit this mechanism in an arm this skinny...at least I don't think so.
I guess then there are patching machines, which are like super skinny arm machines, and those only have top feed. But that's a machine by itself as far as I'm concerned...
Back to the 335. It has horizontal feed on the bottom and compound feed on the top: needle feed with a walking foot, which makes it feed pretty well. It's not a champion climber like my compound feed flat-bed machines, since it's feed dog doesn't go down and can get stuck on stuff, but it does alright.
This variety of 335 has a synchronized binding arm, which you can attach a binding attachment to. This binding attachment moves with the walking foot to make a real nice binding. I'm still working out this aspect of the machine, unfortunately. 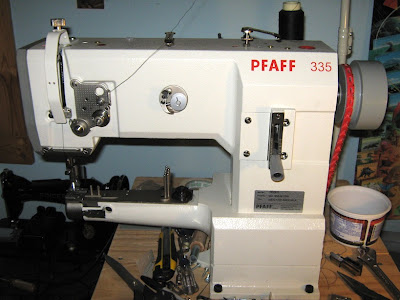 You can see the two bolts just to the right of the feet...that's where the folder attaches. Farther down the binder plate are rods to thread the binding in. 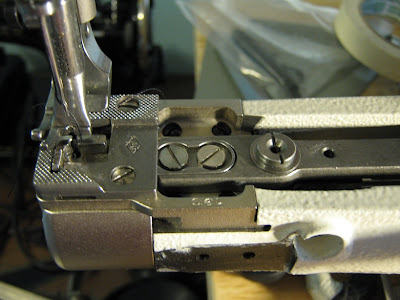 Special feet and needle plate to accommodate the folder/binder. My binder doesn't fit right in there (it's too fat), so I've been working on grinding down the needle plate. Pfaff parts are hella expensive, but fortunately this machine is pretty popular so there are generic parts available for it. I'm grinding down those. 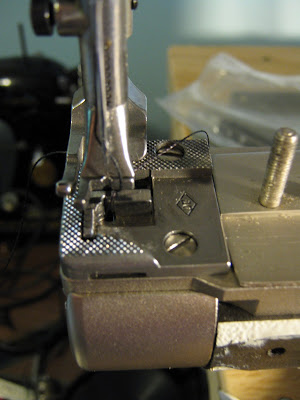 The 335 has horizontal-axis hook. Other popular cylinder-bed machines like the Consew 227 and Juki 341 have a vertical-axis hook. FYI. 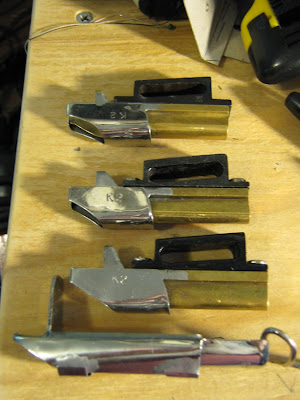 Here're some of the off-the-shelf binders I have. I've had good results with them off the machine, I just need to get them in the right place on the machine so they can do their job.
I still haven't felt like ponying up the 400 dollars for a custom-made binder. And I don't think I've spent that much money on eBay binders yet...but I think it's getting close. Ha.
The rub is: I bought one when I bought this machine and it didn't fit. Ain't that a mother... 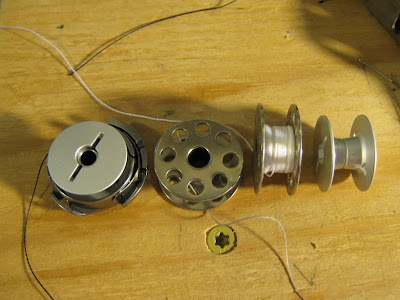 The 335 uses these fancy aluminum G bobbins. In the middle (with the holes) are M bobbins, which my other upholstery machines use. Maybe I should've got a Consew 277RBFS so all my bobbins could be the same size. Ha. Next time. 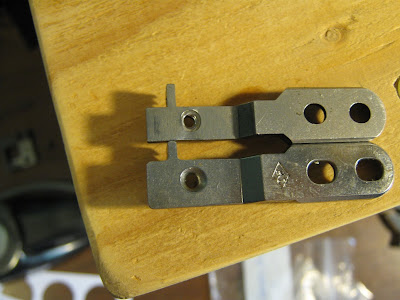 The feed dog on this machine came with a surprisingly small needle hole for a machine that's been touted (on some sites) as a leather machine (light weight leather...it's an upholstery-weight machine). I was having trouble with my T90 thread getting caught in the thread slot (not pictured). Or at least that's what I thought was happening. I was having trouble getting proper top tension...as in the knot wasn't being pulled into the fabric. The test piece of faux leather that came with the machine looked perfect, but I couldn't replicate the stitches. Weird. I must be doing something dumb. I got a generic feed dog for it though, with a larger needle hole, and it's been working a lot better. 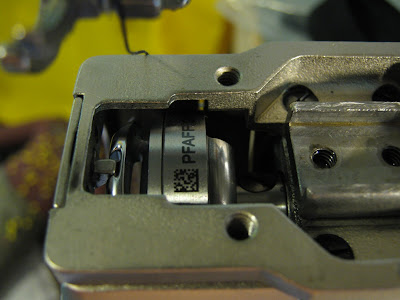 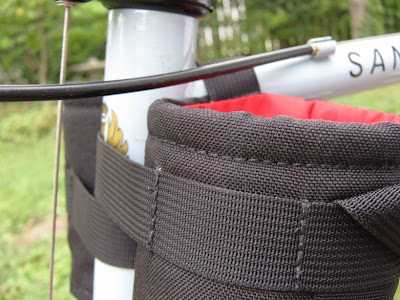 Right now what I've been using this machine for is sewing the top stitch around the edge of my bike coozies...something that's really aggravating to do with a flat bed...and will never look as nice. I've also been using it to sew parts of my bags that are a real pain to sew flat. 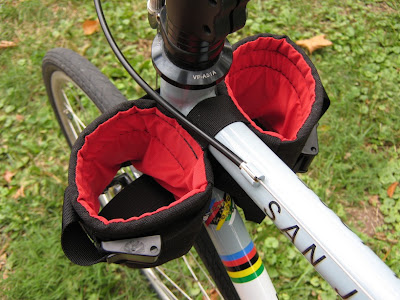 Other things about this machine:

These machines are made in China. Pfaff's been producing machines in the East for a good nine years now. I believe they're running their own factory there and are not just contracting another company to make them. The build quality is excellent...so far. Some sellers will try to tell you these are still made in Germany. Not true. The users manual is all in German, though. I believe Pfaff still makes machines in Germany, but I have a feeling they're of the high-tech variety.

I chose this particular model because a lot of the smaller sewing machine companies have copied this machine almost exactly. I hope this means that parts and information will be readily available forever. Companies like Juki, Seiko, Consew and Adler all have similar machines.

I had to build a table to sit on another table because I'm nearly out of floor space in my workshop. Pretty crazy. One day I might buy another machine and that'll probably be a Juki 441 clone...but we'll see.

I'll try to put some better photos up some time. This post'll be a work in progress till I get the binding issue sorted out, so if there's anything you'd like to see in detail let me know and I'll put it up.