I've been getting emails lately about the nature of my patterns and how to duplicate them and whatnot...so, I thought I'd write a post about how I derive 'em.
I'm not going to post a big file that you can print off and trace onto your fabric or anything. These patterns are easy enough to duplicate with a ruler and triangle. All you need is some newspaper or something equally big to draw on...and maybe a rudimentary grasp on addition. This way you can customize the size to your needs. 'Cause customization is what we're going for here. Yeah.

These are patterns for one-piece bags. You don't have to make your bag out of one piece of fabric, but you could if you wanted to. I think this makes for a stronger and more water-resistant bag, as there are fewer seams to break or for water to get into. Though, I'll frequently make bags with two-piece shells and one-piece liners.

So let's start here...with the essence of messenger bag: the box: 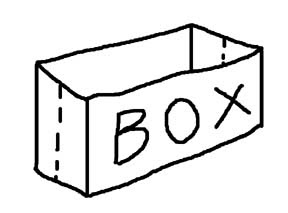 It's a box. You might not realize it, but most messenger bags are built around the proportions of a box. If you can make a box out of fabric, you can make a messenger bag. And if you can't, let's hope you can after you read this.
Most bags don't stay in this shape, though. They get stretched out up top and look like this: 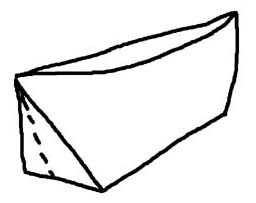 Now let's slap a flap on there. Pow! [I usually make my flaps an inch shorter than the height of the bag.] 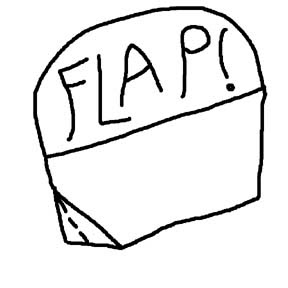 This is basically the shape of most messenger bags--one piece, two piece or three. The tapering corners make for a bag that hugs its host snugly, thus allowing it to carry a bunch of crap on its bike. Woo.
From this transformation, we can divide the bag into six different parts...like so: 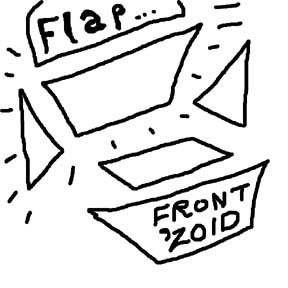 The flap, sides, bottom, and front & back trapezoids.
Rearranged, we get a pattern that looks like this: 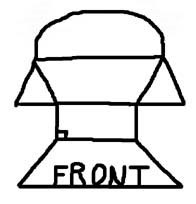 ...well, sorta. [Notice how the front trapezoid is bigger than the back one? They're suppose to be the same size. This drawing is for a different pattern...I didn't draw the one that's suppose to be here...don't worry, hopefully it'll make sense in a few steps.] This is where things start to get fun. This is where the pattern gets wonky--where the box gets corrupted into something that's not quite a box...but close. But let's hold off on that for a sec and finish up on the box pattern.

So that pattern up there (pretend the trapezoids are the same size)...you could take that and cut it out and sew it up, but it would be a bitch to sew because you have to turn those really sharp corners on the side triangles. That's no fun. So let's change the seams around (and save some fabric, too):

We've taken the side triangles, cut them in half and stuck 'em on the front trapezoid.

This is as easy as it gets. This'll make you one boxy messenger bag. And that's okay. It's done us well for decades. And for a complete set of instructions for this bag go here!

But it can be improved. Oh yes. It can be made bigger without being too big to wear.
We do this by making the front trapezoid wider. Beeooop. 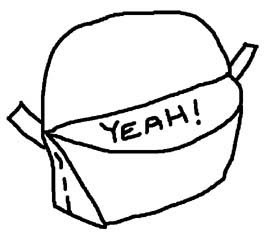 Look how much more stuff you can fit in there!
This also allows you to reach inside your bag when it's still pretty tight round you. This always pissed me off about my T2. I could never put anything in it when I was wearing it. Ha.

So this is how I figure out how big to make the front trapezoid.
I usually add eight inches to the top width. This makes the height a little bit shorter, but not by too much. 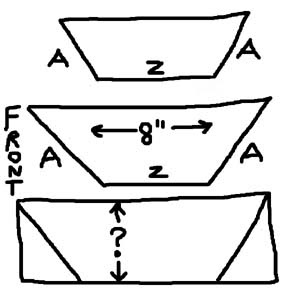 So again, let's look at this drawing. We need to adjust this so it's easier to sew. Again, you cut the side triangles in half and stick 'em on the front trapezoid.

And you get this: 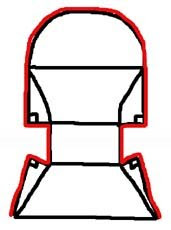 And this is what a basic pattern looks like. The red stuff is the seam allowance you have to add to the pattern (usually 1/2 inch). When I first make a pattern I typically don't put the SA on there and just draw it on the fabric. You sew your liner and shell together, then sew the sides together and put binding tape on the red part. Then sew up the bottom. For some more pics of this, follow the link I put up above. Or just go to my Website and look under Sewing.
I'm calling this "basic" because it's not a bag with a floating liner. That's an entirely new beast.

Floating liners!
This is a liner that is (mostly) independent from the shell. Meaning, the seams of the liner aren't incorporated into the seams of the shell. You can grab ahold of the liner and pull it out from the bag, like you would pull the pockets out of your pants. This makes for a more water-resistant bag, as it's harder for water to get in through the side seams.
I'm gonna talk about two kinds of floating liners. 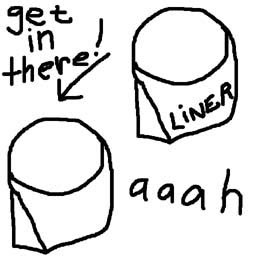 Little scooped-out triangles have been added to the top of the front trapezoid, allowing you to sew the binding tape on the bag in one swoop. (You would sew the sides and bottom of the bag up first, but not bind them.)
This way you can stick the liner into the shell and sew them together. (Make sure to sew the liner wrong-side out.)
Sew on the red part: 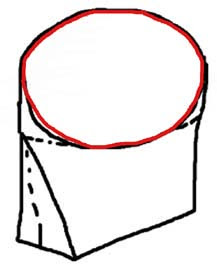 With this design you can put your shoulder strap anywhere on the back of the bag and still have a waterproof corner since those little triangles fold down, sealing things off. Yep.
[Note: I've never made a full bag like this...just small pouches 'n' stuff...but it's a pretty popular design....]


And this is how I make my patterns.
I start with our six-piece pattern with an expanded front trap...

And then I decide were to place my seams. I usually cut 'em about four or five inches from the back trapezoid's top corners. 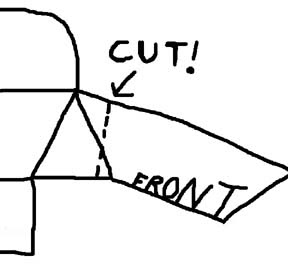 With the basic pattern we cut the side triangles in half, but this is for a floating-liner bag, so we need something a bit more special. We need a pattern that'll allow us to sew the shell and liner flaps together first, and then let us sew the shell & liner bodies together separately. This is what that pattern looks like: 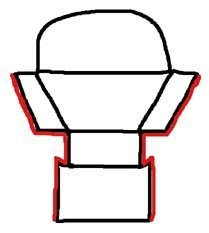 Again, the red part is where we'll add the seam allowance. I usually use a 3/4-inch SA.

Because this pattern has an open corner (two, infact), we need a way to bind the fray. We do this by adding some binding to the tops of the wings and then folding in each wing and adding more binding on top of that fold. (That probably makes no sense.) Like so: 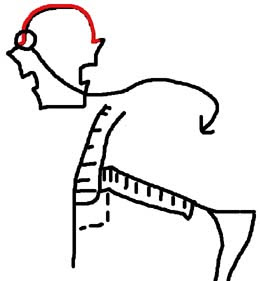 Here we've sewn the flaps together and a few inches of the side (the wing). You can see the liner and shell separate there on the right. It's a good idea to sew on the shoulder strap at this point. Go ahead and sew through the liner, too--you won't get any major leakage. Now we'll make bags out of the liner and shell: 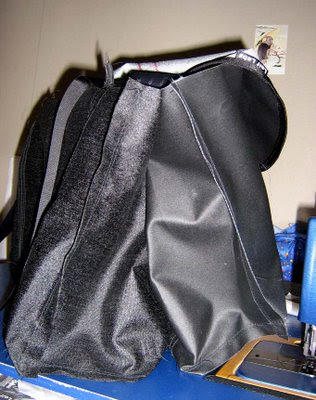 [Old picture! I no longer use a Sailrite machine. Ha.]
Turn the shell right-side out and sew up the lip--shown in red. 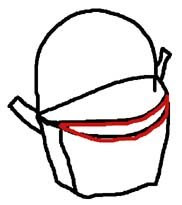 There ya go. There're more posts (and pictures) on making this kind of bag and others on this blog somewhere. You can find them on the Website, LeifLabs.com, under Sewing.
Sorry to tease you with sewing info...this post is suppose to be about pattern-making. Ha.

Here are some options for positioning your shoulder strap. Make sure to do this at the appropriate time. 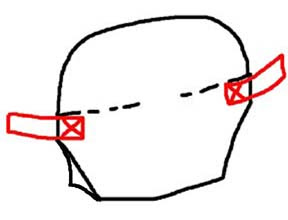 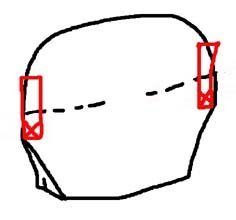 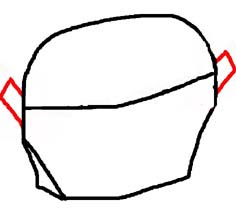 I never talked about what size to make the bag. That's because that's up to you. My favorite bag size right now is my large size, the 22incher (I have an XL, too, the 24incher). I tend to make my bags smaller than most, so it's probably a medium or small at other places.
I start with the width of the flap. On this bag it's 22 inches across. You can measure this on your person with a measuring tape...from where you want to have it on your shoulder to where you want it to come around your ribs when it's empty. I'm like 5'11" and pretty skinny, and I like how the 22incher fits.
Then I decide how tall I want it. This one's 14 inches high. It's a little shorter in the front 'cause of the trapezoid distortion, but by like an inch. I really like how long skinny bags look for some reason (probably phallic), but you just can't fit a lot of stuff in there. All my bags range in height from 12 inches to 14. You can go higher if you're tall enough, or just want your bag to sit on your ass.
Bottom width and thickness. Here's some math for ya: bottom width + thickness = flap width.
This bag is 7 inches thick. I'm a big fan of this thickness. It's thick enough to carry a lot of stuff but not too thick as to need compression straps. Not that I have anything against compression straps--it's just more to sew. Ha. So that means the bottom width has to be 15 inches. The power of the box.

I encourage you to make a paper or cheap-fabric mock-up before you sew with your real fabric...just to make sure it fits okay and all the seams line up. Believe me, I've made a lot of paper bags in my day. Ha.

I'm sure there are some things on this post that are not yet clear. Let me know what needs to be illuminated. But read my other how-to posts first. There's a lot of overlap.

hey cory, i've been reading this blog since almost the beginning and its awesome. i have a question: one thing i always have problems with is the correct size of the floating liner. i usually try to make it about 1 inch smaller than the shell, on each side. but usually this is still not enough, it will warp inside and i have to invert back and make it still smaller.
this is a major mess, especially for the bottom seams because everything shifts, the width changes etc.
do you have some experience how to get that right?

Thanks! Glad you like the blog.
I just make them the same size. As long as the lips line up you should be good. You don't want the liner to be a lot smaller than the shell 'cause it could start to pull the shell down into the bag, or otherwise distort it in a weird way. I think a little liner warping is okay. Most often the liner seams "auto correct" and fold flat against the shell.
And usually there's enough stretch in the shell to accommodate the slight size difference (especially with a bigger bag). Every once in a while I'll have to tuck in the liner a bit at the seams to make it a bit smaller...but this is usually due to cutting error.
Hope this helps.
Let me know if you have any more questions.
cory